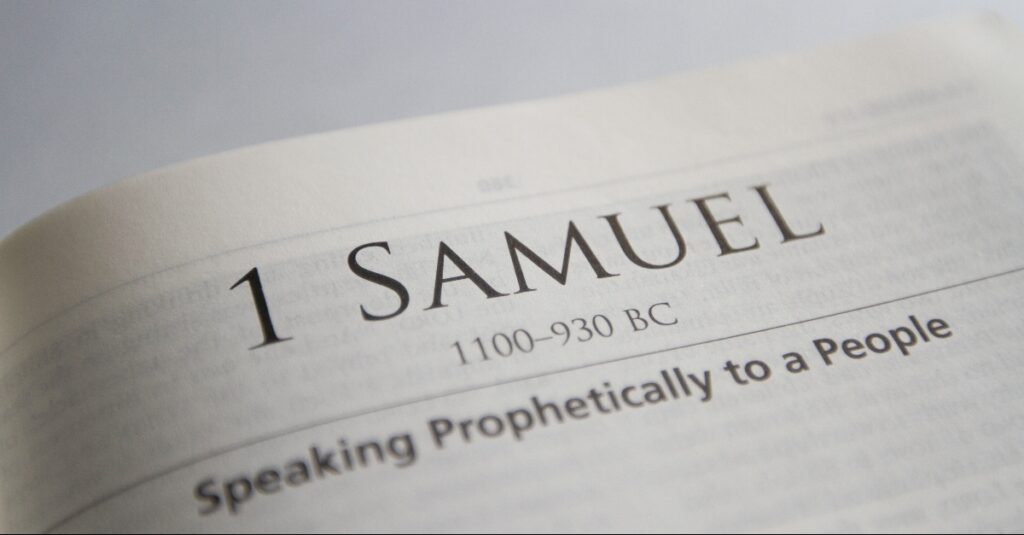 For the second time, in 1 Sam.26, David proved his innocence when Saul came out to kill him. At night David snuck down to Saul’s camp while Saul and his men were sleeping. David spared Saul’s life, but he took Saul’s spear and his water jug. The next day, David stood on a distant hill and yelled over to Saul that he was innocent of treason. David produced the spear and jug proving that they had spared Saul’s life, and once again Saul was convicted of his sin, and David was proven innocent in front of Saul’s army. Saul asked David to return, and serve him, but David was wary. David had given up believing that Saul would ever leave him alone, so David negotiated a deal to work and live with the Philistines. David and his 600 fighting men had made a name for themselves, so they became mercenary soldiers with the hated Philistines. We the students are shocked because David had been living the victorious life of faith in God’s protection. The prophet at Gad had given David God’s Word that David should be in Judah (1 Sam.22:5), but now David and his men go over to the “Dark Side”. For the next 16 months David lives in the dark side with the pagan idol worshipping scum bags, the Philistines. We know David’s problem in 1 Samuel 27:1 when we read, “Then David said to himself”. There was no praying to God in chapter 27. David would not consult God again until chapter 30:6.

First of all, David did not look vertically to God, but he looked horizontally at Saul. David considered only his physical/material circumstances, and did not live by faith depending on the Word of God. Secondly, David let a worldly pessimistic viewpoint rule his life, and he forgot all the times God had delivered him. When our material circumstances cleverly appear to be unsolvable problems, we have a tendency to forget all that God has done for us in the past. Thirdly, David justifies and rationalizes his actions. Saul has a bigger army than me, and God seems to have deserted me because Saul won’t quit. The only place that Saul can’t get me is in Philistia, so just this once I will compromise. Saul’s adversary the evil Philistines suddenly become David’s friend, and David would “shake hands with the devil”. David goes to live with the adversary of God for a time. Some theologians would call David during that 16 months a “carnal Christian”. David was a believer in the true God on the inside, but on the outside he looked just like an unbeliever. David would develop an identity crisis. Who was David and his men? They were not Philistines, and they were no longer citizens of Israel. He was like a man without a country, or a man trying to keep one foot in a carnal world and one foot in a spiritual world. The problem is that man is the only animal that runs faster when he is lost, and David had lost his way.

David’s move was not all bad, and during his stay God would use him to strike Israel’s enemies to the south. Not only was David getting protection away from Saul, but he was in a position to strike against all the southern enemies of Judah. Thus David shrewdly endeared himself to both the Philistines and the Jews. David lied to the Philistine king, and told him he was going out to raid Judah, but he would actually raid Judah’s other enemies. When David brought back the booty the Philistine king was happy. It was all politically shrewd and daring but hardly godly or righteous. David was defying the Word of God by living with the Philistines and he was lying and deceiving to everyone. This makes me all the more appreciative of the transparency and truthfulness of Scripture. No other literature or biography would be so honest about its hero’s failures. In every story in the Bible, it is painfully honest about all the characters’ flaws and mistakes. No man would write such things if he could, and no man could write them if he would.

Hopelessness is Our Enemy

We can live 60 days without food and a week without water, but not a minute without hope. Hopelessness destroys a person by removing our motivation, enthusiasm, and view of the future—we see no future worth having. The good news is that hopelessness never corresponds to truth. The truth is that for those who believe in God, all things work together for good in the end. Romans 8:18 says, “the sufferings of this present time are not worth comparing with the glory that is to be revealed to us”. Remember that the guy who wrote this knew what he was talking about because he had been taken up to heaven to see the glory that awaits us (2 Cor. 12:2-4). Therefore David had an unrealistic sense of hopelessness because the future was bright for him. But for Saul and all the unsaved people there is a realistic sense of no hope just as Ephesians 2:12 says without Christ people are, “alienated from the commonwealth of Israel and strangers to the covenants of promise, having no hope and without God in the world”. In 1 Samuel 28, we see the utter hopelessness of Saul. The Philistines prepare a major attack, and Saul has no one to help, and no one to give council. In desperation he turns to the witch of Endor—how far the mighty have fallen! In Leviticus 19:31 and 20:6, God had expressly forbidden spiritists and mediums, yet Saul was so desperate he actually turned to the adversary of God to advise him. What a pathetic mess Saul made of his life! May God draw to Himself all those who have “no hope and are without God in the world”. Saul only had a short time to live, and in 1 Samuel 31, the Philistine archerPhilistines, s fill him full of arrows and Saul took his own sword and fell upon it.

The Providence of God

David was only human, and therefore he fell victim from despair and went over to serve the enemy. Yet the truth was that even in David’s dark days living in Philistia, God was still with him and God had a wonderful plan for him. David’s despair reached its peak in 1 Samuel 29 when he and his men were ordered by the king of the Philistines to join the battle against Israel. What would David do? Could he possibly in good conscience fight against Israel, his own people? It looked like he was between a rock and a hard place with no way out, but as usual the providence of God kicked in and the Philistine commander rejected David and sent him away.

What was David Thinking and Praying? Psalm 13

David wrote a lament Psalm that lets us in on his feelings and prayers during the dark days of his life. David cried out to God, “How long Oh Lord? Will you forget me forever? How long will you hide your face from me?” David felt like God had abandoned him, and turned His back on him. He just felt like he couldn’t endure any longer. The good news was that ultimately David knew the truth, and the truth always overrules appearances, feelings, and emotions. Therefore David finished his prayer with, “But I have trusted in Your steadfast love, my heart shall rejoice in Your salvation. I will sing to the Lord because He has dealt bountifully with me.”

Previous1 Samuel 25 Abigail and David
NextAftermath of 1 Samuel—Why do the Wicked Appear to Prosper?