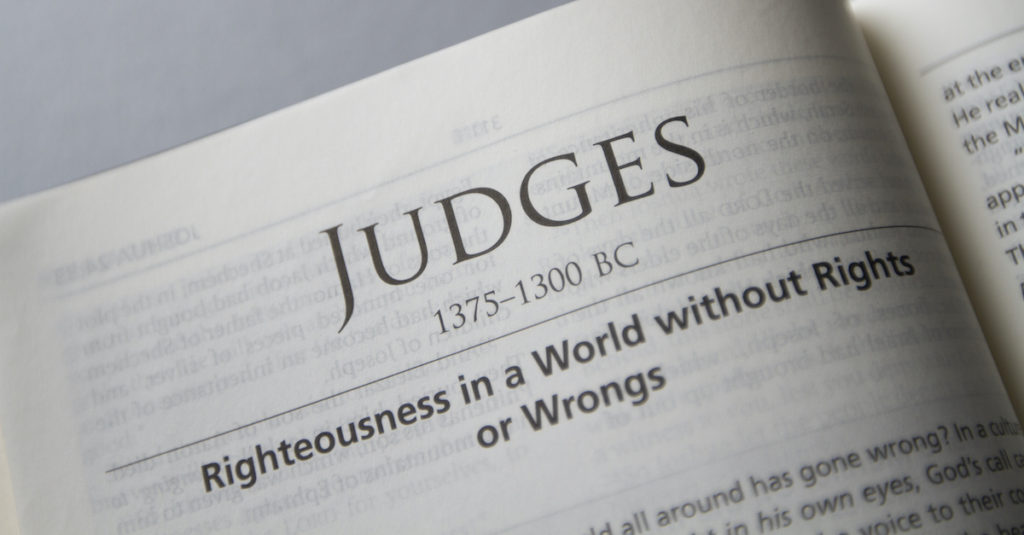 After Gideon and his 300 men defeated the horde of Midianites and Moabites in Judges 7 and 8, Gideon pursued the enemy. He was hindered by his own countrymen, the Ephraimites, and he got no help from the cities on the east side of the Jordan River. Nevertheless, Gideon was able to wipe out the enemy. Gideon and his men took as loot and spoil all the gold jewelry and the gold crescents that were on the camel’s necks. In Judges 8:22-23 we hold great hope that Gideon will be a great man of God and protector of Israel because he turns down the offer of becoming King of Israel. To his credit Gideon said, “I will not rule over you, nor shall my son, only the Lord shall rule over you”. If the story stopped there, Gideon would have been one of the great heroes of the Bible, but v.24 reveals his weakness that corrupted him. Gideon did not desire the power of being King, but he did desire great riches as payment for serving God. Gideon asked for 1700 shekels of gold beside the crescent ornaments as well. Then he used the gold to make an ephod, which he placed in his city, Ophrah. What happened here, and what is an Ephod? The official ephod was worn by the high priest in the Tabernacle at Shiloh. On the front of the ephod were the Urim and Thummin, two stones God used to give direction to Israel in times of crisis. This was exclusively to be used by the high priest and only at the true Tabernacle. What Gideon had done was to set up his hometown as a rival place of worship. The effect was that all Israel came there to Gideon instead of the true Tabernacle at Shiloh. Clearly this supposed hero is a badly flawed would-be King who misled Israel. Our fears are increased when we read that Gideon had 70 sons by many different wives. He even had an illegitimate son named Abimelech, which means, “My father is king”. Gideon may have appeared to reject the kingship, but in reality he lived as one who aspired to be king. Therefore in Gideon’s life there was a wide gap between what he knew was God’s will, and the desires of his heart and actions of his body. Gideon made three huge mistakes that destroyed his legacy. First his greed got the better of him, then he led Israel into idolatry with the ephod, and thirdly he had a multitude of wives and concubines. Our suspicions about the effect Gideon’s immorality might have on Israel are well founded as we read in Judges 8:32-35 that after he died “the sons of Israel again played the harlot with the Baals”.

Judges 9–the Man Who Would be King

Judges 9 acts as the conclusion of the fourth cycle of Israel’s apostasy followed by God’s discipline bringing oppressors to get their attention and then God delivering them from the oppressors. What is the consequence of Gideon’s polygamy and idolatry? Abimelech was his illegitimate angry and ambitious son who would cause a lot of problems. Being illegitimate, he would not inherent anything. Abimelech undid any positive work that Gideon had accomplished. We could call Abimelech the “anti-Judge”. Gideon had seventy sons from many wives that all rejected Abimelech, but Abimelech’s mother’s clan embraced him as the ruler of Israel, and the outsiders wanted inside. Abimelech’s question to his mother’s family was “Do you want Gideon’s 70 sons to rule over you, or do you want your own close relative to rule?” The men of Shechem fell for his perverse logic and gave Abimelech 70 pieces of silver to hire a private army of thugs and hired killers. In Judges 9:3-6, he and his henchmen rounded up the 70 sons of Gideon and executed them. Then the people of Shechem declared Abimelech King. I suppose they thought they had it made now and all their ambitious dreams of money and power would be realized but—not so fast!

By the providence of God the bad guys missed one son of Gideon, Jotham the youngest son. The lone survivor, Jotham had a wise plan to confront the men of Shechem. Jotham stationed himself on a high place above them where they could hear him, but they could not get ahold of him to shut him up. He yelled down an interesting fable to illustrate the mistake they had made in backing Abimelech. Interestingly, the name Jotham means “God has integrity”, and the story he told was all about integrity and truth.

In the fable, the trees go out to choose a king, so they approach four different plants. In the story each of the first three decline the offer to be king, but the fourth is a bramble bush, so the bramble said “If you want me to be king then take refuge in my shade”. The bramble then made a threat against them– if they would not then he would burn them up. Obviously a bramble bush can’t provide shade, and Abimelech couldn’t offer protection either. In Judges 9:16-20, Jotham explained the parable and predicted the disastrous results of selecting Abimelech to rule over them. Jotham’s implication in the parable is since the trees (citizens of Shechem) have done the absurdity of making Abimelech their king, then they will get burned in the end. Verse 16 is like a rhetorical question, “Have you really dealt in truth and integrity?” No way! Remember, Gideon took a great risk and fought for you and saved you from the tyranny of the Midianites, but in return you rose up and murdered Gideon’s family. In verse 20, he applied the parable saying basically “you deserve a scumbag like Abimelech and it will not end well for you or him”.

Abimelech then appeared to prosper and rule over that area of Shechem for three years. Therefore we are wondering where God is in all of this. Was God absent or disinterested? After all nothing happened as the bad guy murdered Gideon’s family and set himself up as king. In v.23 our question is answered. God intervened to bring about the curse that Jotham predicted by sending an evil spirit to rile Shechem up against Abimelech. Former allies became enemies, and Abimelech slaughtered a bunch of the Shechemites, but in the end a woman dropped a millstone on his head and crushed him. The author lets us know in v.56-57 that God’s providence is involved in this retribution as we read “God made all the evil of the men of Shechem return on their heads, and upon them came the curse of Jotham”. Abimelech and the Shechemites devoured each other just as Jotham’s fable predicted.

Sow the Wind, Reap the Whirlwind

I have been hearing that expression all my life, and I understood basically what people meant about consequences, but how exactly do you sow/plant the wind? Even harder how do you reap or harvest the whirlwind? Year’s ago I stumbled upon this passage in Hosea 8:7, so like most proverbial sayings that are used through the ages and generations, this one comes from the Bible. In the book of Hosea, God sent the prophet to Israel to convict the people of their idolatry and other sins, and to warn them of coming severe judgment. Israel’s economy was agrarian so they understood planting and harvesting. Agriculture operates on the principle of duplication. The type of seed planted determines the type of plant that would grow. A farmer plants one kernel that reaps a bigger plant full of corn. Hosea used that to make his point by saying that metaphorically, if you plant the seed of wind, you will reap a greater plant of a destructive whirlwind. The sin of Israel would bring on amplified consequences. Israel would receive a storm of consequences. The foolish pursuits of idols, power, sexual lust, and greed would reap severe judgment from God. In fulfillment of the prophecy, Assyria invaded Israel in 722 BC and destroyed the nation, took all their stuff, and deported the people as slaves. In the same way, in Judges 9:20, Jotham told the people that since they had dealt treacherously with Gideon’s true family, something far worse would happen to them. Their participation in murdering the 70 sons and making Abimelech their king would cause their destruction. We cannot miss the ever-present theme of the retribution of God. Retribution is part of the curse of Genesis 3. God said that if they wanted to take things into their own hands and live independently of God, He would allow it, but long term it would be a disaster for them. Then in Genesis 4 we see the proud farmer Cain refused to make a proper sacrifice to the Lord, and out of jealousy he killed his brother. Therefore he became a vagrant and a wanderer fearing for his life. In Genesis 6 we see God’s retribution in the great flood, and in Genesis 11 because of idolatry God confuses their language and drives them out of Babylon. We could walk right through the Bible and see the theme of God’s retribution in every story.

We have all heard the many clichés about payback for evil like: “Don’t worry he’ll get his”, or “He’ll pay the piper” or payback is a b!#&$, or “turn about is fair play”. All commonly said about the cause and effect of retribution in this world we live in. If you are like me you have known good people who pushed the limits in business ethics until they went so far that they were convicted of white collar crime. Their defense is usually, “Nobody got hurt, and everybody does it”. Yet their punishment quite often seems way worse than their crime—SOW THE WIND, REAP THE WHIRLWIND. If we have seen or experienced and read in the Bible temporal retribution, how much worse would eternal retribution be? Jesus taught often about the final judgment and how people would be separated to heaven or hell. In Matt.13:41-43, Jesus said that at the second coming His angels would gather the righteous people into the Kingdom of God, but “those who commit lawlessness” into the furnace of fire, and again in Matt. 13:49-50, “The angels shall come forth and take out the wicked…and cast them into the furnace of fire” (see also Matt.23:33;25:41,46, Mark 9:43-44, Luke 12:5, Romans 2:5-9,Rev.20:11-15). Therefore, be sure that now while you have the opportunity, now while the Gospel invitation is offered for sins to be forgiven, that you come to the Lord and believe in Jesus Christ who alone atoned for your sins. Just as Peter said in Acts 4:10-12, “Jesus Christ…whom God raised from the dead…there is salvation in no one else, for there is no other name that has been given (by God) among men by which we must be saved”.