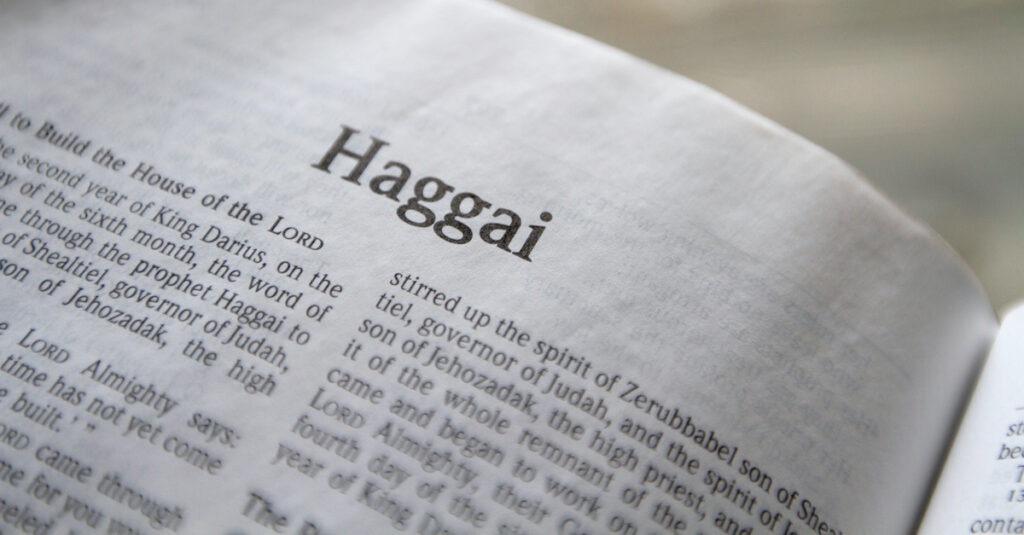 When Babylon invaded Judea and destroyed Jerusalem in 586 BC, the destruction of Solomon’s Temple was the end of the Jewish religious services as prescribed by Moses. As exiles in Babylon, they were without a temple and without the ability to make the sacrifices and celebrate the Passover and Day of Atonement that required the priesthood operating in the temple. After Persia conquered Babylon, King Cyrus decreed that the Jews could go home to Jerusalem and rebuild the city and temple in 536 BC. Almost 50,000 Jews made the journey to Jerusalem with Zerubbabel and the high priest Joshua. The prophets Haggai and Zechariah also returned with them. In the second year of their return they were able to lay the foundation for the temple (Ezra 3:8-13). Unfortunately, their neighbors the Samaritans stirred up some trouble for them and they had to stop construction of the temple. In the year 520 BC, God raised up the prophet Haggai to encourage the people to rebuild the temple (Ezra 5:1-2). Haggai’s challenge was to arouse the Jews from their spiritual lethargy to action. His message was joined by the prophet Zechariah, and the temple was completed in 515 BC.

In English Haggai sounds like a bad word, but in Hebrew it means festival. He was the first prophet that God used to speak to the postexilic Jews—by postexilic I mean after the exile in Babylon. In the Book of Haggai in our Bible, Haggai delivered four messages to the Jews in Jerusalem in 520 BC. Haggai delivered a message from God that the people had forgotten their priorities, and were living for themselves rather than for God. Five times in two chapters God said, “Give careful thought to your ways.” They were being very diligent and hard working concerning their own houses and vocations, but had neglected God’s. Their failure to proceed with the temple was the result of inverted priorities. By putting their own homes and fields and vineyards first, they had put the things of this world before God and thus had fallen into a form of idolatry. Don’t be confused, God knows you need shelter, food, and clothes; but from Haggai’s description, we can see they had put all their attention and affections into their own stuff and their own activities.

Haggai’s words paint a picture of a generation of people who had feverish but ineffective activity. They plant much but harvest little, they eat a lot but never get enough, they drink a lot but never have their fill, and they put on clothes but are not warm. This all sounds exactly like life now. People are never satisfied, and they always go about frustrated with a longing for something that is just not there. Like the lady who said “I have nothing to wear and not enough closet space left to put anything new in.” People seem to have everything, but they are just miserable with a smile on their face to cover it up. This reminds me of Psalm 106:15 which says that Israel in the wilderness craved for something different than God gave them, so God gave them their request but they got sick from it. In the same way, it seems that when we get eaten up with materialism, we get sick, and God is saying, “Give careful thought to your ways.” Haggai rebuked his audience for what they had not done, and then showed them the fruitlessness of what they had done. You built nice houses, planted fields and vineyards for yourselves, and what good has it done you? Meanwhile the house of the Lord remains unbuilt.

Can’t Get No Satisfaction

I have been reading about addictions, and one of the common traits of all addictions is “tolerance” which is the experience of needing an ever increasing amount of a particular substance or behavior in order to try and satisfy the desire in the subject. This is true in chemical dependencies but also in our compulsions about food, drink, work, approval, intimacy, security, or possessions. Wikipedia defines addiction as “a continued involvement with a substance or activity despite the negative consequences associated with it. Pleasure and enjoyment would have been originally sought, however over a period of time increased involvement with the substance or activity is needed to feel normal.” Psychologists now mean addiction to include dependency on such compulsions as gambling, food, sex, pornography, work, exercise, etc.

These compulsions symbolize what plague the human condition. We must make more money to buy stuff that costs more money to have or operate so we must make or borrow more money, and at a point we have so many possessions that they become a responsibility, and we don’t enjoy them anymore, but we can’t stop because we have such a huge stake in them. One author says, “We drink liquids that dehydrate us. We buy objects that require us to buy more objects. The cure for overweight is to buy bigger pants. The harder we work, the more work there is to do. The harder we play, the more elusive the fun. Yesterday’s thrill is today’s old news. We always need more.” C.S. Lewis explained all these desires with very little satisfaction accompanying them, by saying something to the effect that we were created for a different world, meaning heaven. “Therefore if we find in ourselves a longing for something that cannot be fulfilled by anything in this world, it is logical that we were created for a different world.” I think we do have an intense desire for the spiritual—an intense desire to know God. When that desire for God is misdirected in a fallen world to substances, stuff, and activities, it creates a frustrating painful experience.

The Time Has Not Come for the House of the Lord

This is what the people in Jerusalem were saying in 520 BC. This was their excuse that they did not have the time now, or that there would be plenty of time later. Amazingly, this is still the excuse people are using today to put off or neglect the Lord’s work. A week does not go by that I don’t hear something like, “I wish I had time for that but”—then they list all their important activities. Another guy told me that he was planning to get involved as soon as his “ship came in”. So far that has been a slow ship. God’s reply through the prophet Haggai was “Is it time for you to dwell in your paneled (plush) homes while the house of the Lord lies desolate?” (1:4) Haggai went on to tell them that they had a lot of work that is worthless in God’s view. They eat and drink a lot that doesn’t quench, and make money that doesn’t last. As Mick Jagger would say, “They can’t get no satisfaction. Ah no no no”

The Good News in Haggai

After a good rebuke that was handled very well by the leaders and people of Israel, it is good to know that Haggai’s audience responded well to God’s Word. They recognized that what Haggai said was God’s Word, and they did what Haggai commanded. In Haggai 1:12 we read, “Then Zerubbabel, Joshua the high priest, and the remnant of the people of Israel obeyed the voice of the Lord their God…And the people feared the Lord.” Then in 1:14, “So the Lord stirred up the spirit of Zerubbabel the governor and the spirit of Joshua the high priest, and the spirit of the remnant of the people, and they came and worked on the house of the Lord.” Then on the 24th day of the sixth month in the second year of King Darius they changed their priorities, and dedicated themselves to the Lord’s work. We believe the exact date of that in our calendar is September 21, 520 BC.

That’s pretty cool to know the exact date a whole nation of people literally turned their lives around for the better. I wonder if there is a date like that in our lives we can point to when God may have “stirred up our spirit” like He did to Haggai’s people? What do you think that means that God “stirred up their spirit”? For sure it does NOT mean that some preacher made them feel obligated to give money or show up to do some service project their heart really was not in. First of all it is the effect that God’s Word should have on us if we are really listening. The Spirit of God typically uses the Word of God to stir up our inner person or spirit so that we feel convicted and desire to make changes. Secondly, God uses circumstances to get our attention or to bring us back to reality. In Haggai’s time, the Lord used a crop failure to get their attention (2:15-16). Hopefully we are not so addicted to the compulsions of this world that God needs to bring a crop failure into our life, but if He does it will be the best thing that ever happened if it causes our “spirit to be stirred”, and we repent.

Life for Israel in 520 BC continued to be very harsh and difficult, and they had much opposition. Instead of changing how hard life was or removing the evil, God with much repetition repeated what He had told Moses, Joshua, Gideon, David, and most of the other biblical characters, “But now take courage…for I am with you…My Spirit is abiding in your midst; do not fear!” In spite of how hard life was, they finished the temple in 515 BC.

Do the New Testament authors have the same message for us? Paul wrote in Ephesians 6:10, “Finally, be strong in the Lord and in His mighty power”. Jesus addresses every problem that Haggai mentioned and that we now have as well. Your crops don’t grow? Jesus is the Vine. Can’t get enough food or drink to satisfy? Jesus is the Living Bread and Living Water. Can’t get the clothes you want? Jesus alone can cover us and take away sin. Money problems? Store up treasure in heaven. All your misdirected compulsions turn out to be a spiritual desire for what only Jesus can supply.

PreviousGenesis 6-9-the De-creation of the Flood
NextHebrews 11-12, The Life of Faith