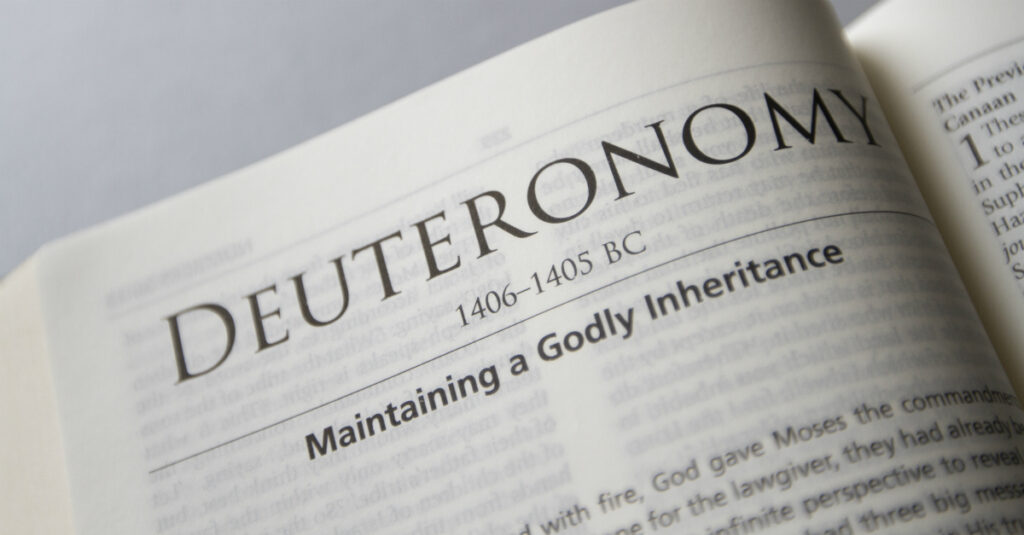 Deuteronomy: A Renewal of the Covenant

Many people may not know that the entire generation of Israelites who were led out of Egypt by Moses were not allowed to enter the “promised land”. A year after they left Egypt they were still camped at Sinai receiving the instructions from God about the Tabernacle. God then led them towards the southern border of Canaan. On the way, the book of Numbers records the general discontent of the people, and in chapter 11 they complained constantly about everything, even going so far as to say they wanted to go back to Egypt. They murmured about the food so God provided them with meat. Then in chapter 12, even Miriam and Aaron spoke against God and Moses. Here’s a tip-when God has just delivered you from slavery, saved you miraculously from the Egyptian army by parting the Red Sea, and provided food and water for a multitude of people in the desert, don’t complain and challenge God’s appointed leader. You have heard of a “come to Jesus” meeting? God called Miriam and Aaron to come to the Tabernacle where they beheld God’s fearful glory and heard His awesome voice. God reaffirmed Moses as the leader, and just to get their attention, God gave Miriam a bad case of leprosy. Guess what, she had an attitude adjustment! Moses interceded on her behalf so God healed her after seven days.

Shortly after these mini-rebellions, Israel arrived at Kadesh Barnea on the southern boundary of Canaan. Deut.1:22 tells us the people asked to spy it out before they would go in, so God allowed it. One man from each tribe was allowed to go in. The twelve of them travelled through the desert up into the hill country where Jerusalem is and checked out all the fortified cities, and then came back scared to death. Their report found in Numbers 13:28 was that the land was excellent, but the people were big, strong, and well armed. The cities were large and impregnable so they gave the bottom line analysis, “We are not able to go up against the Canaanites for they are too strong for us.” Of the spies, only Joshua and Caleb advised that they should trust God, and go into the land as Caleb said, “We should by all means go up and take possession of it, for we shall surely overcome it.” Nevertheless, in Numbers 14, there was a great rebellion of the people who cried out that they should have just died in Egypt if this was their fate, and they conspired to “appoint another leader and return to Egypt.”

Moses reaction to this tells you what a good guy he was. He interceded for the people begging God not to destroy them only because of God’s mercy and lovingkindness. God agreed not to destroy the lot of them, but He told Moses that since they had rebelled ten times they “shall by no means see the land which I swore to their fathers” except Joshua and Caleb. In Numbers 14:29, God told the people that they would wander in the wilderness until “your corpses shall fall in this wilderness, according to your number from twenty years old and upward.” Therefore, that adult generation that came out of Egypt would not see the promised land, but their children would. In order to make this point, the ten spies that gave the unfaithful report died by a plague right there on the spot. The next morning all the people mourned and asked for a “do over”, but Moses told them it was too late. Still, they would not listen, and tried to go into the land, but the Canaanites kicked their behinds all the way back.

Approximately 38 years later, all the generation that rebelled at Kadesh Barnea had died out, and God led the people of Israel through the land of Moab to the east of the Dead Sea and up to the east bank of the Jordan River. They camped there across the river from the ancient city of Jericho. Back in Exodus 3, Moses had been a very reluctant leader, and asked God to get somebody else. Now, at the end of his life, he had spent the last 40 years trying to get the people of Israel into the promised land. Imagine four decades of unfaithfulness by an entire nation, how frustrating would that have been? Now, just before they were to go into the land, Moses had one last shot to prepare the second generation. Deuteronomy is our record of Moses’ final words to Israel before his death. Moses had dragged the first generation out of Egypt only to find that they still had Egypt inside them, but here before his death, their children are on the verge of becoming a new nation in the land under the governance of God. Here’s a trivia question—How could Moses speak to a whole nation of millions of people? He probably had “shouters” repeat his words projecting them out for all to hear.

Deuteronomy is made up of four speeches or sermons by Moses. Some theologians call it three sermons and a farewell speech, but either way, it was his opportunity to remind that new generation of all that God had done, and then repeat the law that God gave their parents at Mt. Sinai. In that sense it was also a renewal of the Mosaic Covenant between God and Israel.

The name of the book, Deuteronomy comes from the Greek Septuagint and means “the second law”, and probably comes from a mistranslation of Deut.17:18 which actually says “copy of this law”. Nevertheless, it is a good title because it is the second time Moses gave the law to Israel.

The first sermon Moses gave was a recap of all that God had done for them in the Exodus. The theme was that God did it. Then God provided for them and protected them for 40 years. The key word in the first sermon is “remember”. Remember the miraculous plagues in Egypt, the Red Sea crossing, the manna from heaven, water in the wilderness, all the battles won, and all the tests, but remember most importantly that God did it. The problem with human nature is that it easily forgets. We have a selfish memory that is mainly interested in “What have you done for me lately?” They had 40 years of daily forced dependence as God provided food, water, clothes, guidance, and protection. The problem for Israel was that once they got into the land the manna would stop. As Deut.8:12-14 foresaw, success, not failure would prove to be the greatest danger facing Israel. This danger prompted the second sermon.

In the second sermon of Moses, he laid out three annual festivals that all Jewish men were to attend every year. These were designed not only as times to worship God, but were memorials to God’s great miracles done for Israel and His provision for Israel historically. They were also ordered to destroy all the places where the Canaanites had built to practice idolatry. According to the first and most important commandment, “You shall have no other gods before Me”, there would be no competition of religions. There would be only one Tabernacle where they would come to seek God through the priesthood. It was very important that they not be influenced or polluted by the Canaanites or their evil religions. Therefore they were to be set apart from the Canaanites in what they ate, how they looked, in marriage, how they worshipped, and every walk of life. In this context they were given the eating restrictions, care for the poor, festivals, prohibitions against fortune telling and the occult, and limitations on criminal penalties.

In the third sermon found in Deut. 27-28, Moses gave the conditions to enjoying peace and prosperity in the land. Put very simply, they had to be obedient primarily to that first of the Ten Commandments that Moses had emphasized in Deut.6:4-6 by saying, “Hear O Israel! The Lord is God alone! And you shall love the Lord your God with all your heart and with all your soul…these words you shall teach to your children…you shall bind them on your hand, put them around your head, and write them on your doorposts”. The point to adding that last part was that they needed to do whatever it took to remember it. Later, the Jews put this command in pouches and boxes and wore them as phylacteries, and put mezuzah boxes on the doorposts. In Deut.28, as Moses gave them the blessings and the curses associated with obedience or disobedience, he seemed to morph into a prophetic prediction of Israel’s future. The fact that the blessings are only the first 14 verses, and the curses are verses 15 through 68 suggests that the curses represent Israel’s real future. In fact he starts out in verse 15 sounding like the curses are conditional, but as he goes along there is no doubt he is detailing something that is actually going to happen. Since we live about 3400 years later, we have the advantage of hindsight, and it is easy to see the prophetic history of Israel in Moses’ sermon. Deut.28:15-35 sounds exactly like the time of the Judges which began about a hundred years later and lasted about 300 years. During that time, nothing seemed to go right for periods of time as foreign nations invaded, raided, and devastated the land—just as Moses said “you shall be oppressed and robbed continually…A people you do not know will eat up the produce of your ground”.

A second time period of discipline upon Israel was the captivities by Assyria in 722 BC and then Babylon in 586 BC. Deut.28:36-63 seems to be foretelling about those captivities whereby their great cities would be besieged by Assyria and later Babylon resulting in terrible famine, disease, and destruction. At the end of the sieges, the people would be drug off to foreign lands in captivity. The harsh warning explained that, “Because you did not serve the Lord your God with a glad heart; therefore you shall serve your enemies whom the Lord will send against you”. The third part of Israel’s history could be called “the dispersion” around the world, and is predicted in Deut.28:64-68.

In his farewell parting sermon Moses well said, “I have set before you today life and prosperity, and death and adversity…I call heaven and earth to witness against you today, that I have set before you life and death, the blessing and the curse. So choose life.” It sounds very simple, but history reveals that very few make the right choice.
CHARLIE TAYLOR

PreviousGenesis 28—The Stairway to Heaven
NextGenesis 3:15-24 – When God Rigged the World