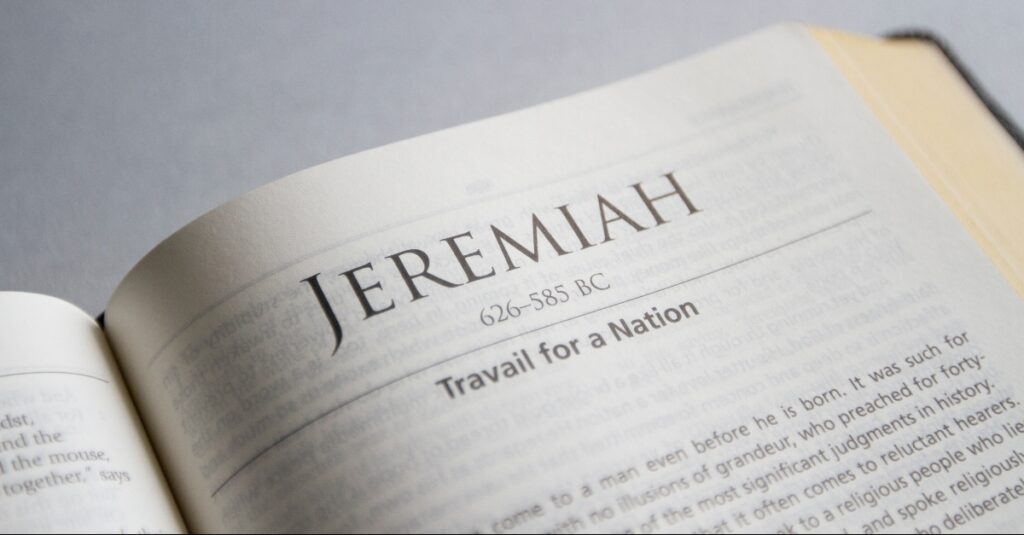 The prophet Jeremiah pronounced his oracles against Judah and Jerusalem before, during, and after the Babylonians laid siege to all Judah’s cities, and destroyed Jerusalem about 586 B.C. Jeremiah prophesied during the reign of four kings of Judah: Josiah (640-609), Jehoiakim (609-598), Jehoiachin (3 months), and Zedekiah (597-586).

After over 50 years of servitude and harassment by Assyria, good King Josiah took over and led Judah to independence. He also led Judah into a spiritual revival, a rebuilding of the Temple, a return to the Torah, and a doing away with idolatry. During his reign, Judah enjoyed a season of stability, however it was just the calm before the storm. When Josiah died in battle fighting Egypt, Judah went back to idolatry, and servitude to other nations—first to Egypt and then to Babylon. Jeremiah’s activity as a prophet fell mostly during those evil times from 609 to 586 B.C. when Jerusalem was destroyed. His prophetic statements and symbolic acts related to the unstable evil social and political conditions in the years just before, during and after the fall of Jerusalem.

The Structure of the Book of Jeremiah

We can break Jeremiah down to two main sections-ch.1-25, and ch. 26-52. Theologians call the first section Jeremiah the Prophet, and the second section Jeremiah the Book. His prophecies and predictions in the first section were mainly given after Josiah died and well before the siege of Jerusalem. The second section, “The Book” seems to be written during and after the siege of Jerusalem that ended with its destruction in 586 B.C. Within the book section, ch.30-33 are called “The Book of Consolation”. In this part Jeremiah predicted the future restoration of Israel, the New Covenant of grace, and the coming Kingdom of God. Chapters 36-45 are called the “Baruch Narrative” after Jeremiah’s secretary. God called Jeremiah to record all his prophecies from 627 BC to that day in 605, so he had Baruch write them down as he dictated. Since Jeremiah was banned from the Temple by the king, Baruch read the scroll in the Lord’s Temple. Since the prophecies were mostly about the consequences of evil and idolatry, and predicted the fall of Jerusalem, King Jehoiakim burned the scroll. Chapter 46-51 are called “The Oracles Against the Nations”, and give prophecies concerning all the nations like Egypt, Philistia, Moab, Ammon, Edom, Syria, Arabia, and particularly about the fate of Babylon. Chapter 52 is a kind of historical appendix which gives the details of the siege and destruction of Jerusalem.

The prophetic section of ch.1-25 contain prophecies concerning Judah and Jerusalem. Jeremiah announced to three different kings that the leadership and the people of Judah are very displeasing to God because of the hypocrisy, the evil, and the idolatry. Therefore Jeremiah announced God’s coming judgment on Judah using Babylon and King Nebuchadnezzar. If judgment is the key issue in ch.1-25, God’s resolve to restore and redeem His people is the core secondary issue. Israel had a place in God’s plan beyond their exile to Babylon. Everything Jeremiah wrote to Judah represented the end of an era of the Jews living in their land being ruled by their king, but it also spoke of the emergence of another era. The days of the dreams of the Kingdom of Israel ruled by a Davidic king were over. Judah would soon fall and become a community in exile, displaced into the Babylonian Empire. The book of Jeremiah can be called a literary reenactment of the death and dismantling of one world (in ch.1-25) in preparation for the emergence of another (in ch.26-52).

Jeremiah was a reluctant prophet that did not want to take this harsh message to the leadership of Judah, but God compelled him. Jeremiah was also called the mourning or crying prophet because he complained to God about the terrible message he had to give to his own people. He cried and complained about being rejected by the leaders and the people. He pleaded with Judah to respond to his message in 13:17, “My soul will sob in secret, and my eyes will bitterly weep and flow with tears.” Jeremiah never made a convert, instead he was hated, beaten, put in stocks, imprisoned, and throne in a cistern. Jeremiah cried out to God, “Why was I born to see trouble and sorrow so that my days have been spent in shame?”(20:18). He was a man who mourned the coming fate of his people and his city. He was condemned to watch the agony of an exhausted corrupt country brought to its knees. He had to stand by and watch his people go into captivity. It was his lot to try to halt a nation rushing headlong to destruction, knowing that they would not listen. God compelled him to make the heroic effort, but predicted he would fail.

Why would God bother to send a good man on such a mission doomed to failure? Because God is very patient and gives people every possible opportunity to repent, and it establishes their responsibility. No one can say, “I didn’t know, you should have warned me.” God had sent prophets to warn them for 800 years, and they had not listened, but now, one last time He sent Jeremiah right when they stood on the precipice of destruction. Also, God wanted Israel to know that although they were guilty and must suffer the consequences, it broke His heart as it did Jeremiah’s. Jeremiah also gave the message that God is faithful, loving and gracious, so keep your hope that there is a glorious future of a New Covenant with restoration and peace.

The Call, the Excuses, the Commission of Chapter 1

The call of God to Jeremiah involved a divine encounter (v.4), a commission from God followed by an objection from Jeremiah (v.5-6), and then a divine reassurance (v.7-8). God followed this encounter with two visions that supported his calling in Jer.1:11-19. God’s words made it obvious this calling was no sudden knee jerk reaction. God told him that before Jeremiah was born, God had chosen him to do this. God appointed him to be a prophet before his parents conceived him, therefore what are Jeremiah’s chances of talking God out of this? Nevertheless, Jeremiah tried, saying “I’m not a good speaker, and besides I’m way too young for this!” Actually we should relate to Jeremiah because he has self doubt, and he perceives his shortcomings. Jeremiah was expressing his feeling that he could not succeed at turning Israel away from its present course. What he did not yet understand was that God did not expect him to accomplish the reform of Israel. Success would be obedience by faith. Just take the message that God gives you and deliver it by faith. God reassured him by explaining that it would not be about Jeremiah, but about Who sent him and Who would be with him. God said “Jeremiah, it is normal to be afraid, but don’t be afraid because I will be with you” declares the Lord, then God touched his mouth and said, “I have put My words in your mouth.”

Shortly after the call in v.11-16, God gave him two visions to support him. Jeremiah saw a rod of an almond tree. The Hebrew word for almond meant “watching”, so God was telling him that He would be watching over Jeremiah, and watching over His word to fulfill it. The second sign Jeremiah saw was an overturned pot of boiling fluid. This boiling pot from the north was tipping over dangerous forces that would pour out upon Judah in a military assault. Verse 16 explains why God would do this, using descriptions of Judah as wicked, and forsaking God for other gods. Verse 17-19 encourage Jeremiah and warn him, “Now, gird up your loins, arise and go speak to Judah all that I command you.” What would be their reaction? They would “fight against you”, but Jeremiah would prevail in the end.

Jeremiah 7 records for us the clear message that he was sent to give. Jeremiah stood up in the Temple in Jerusalem and delivered an indictment of their evil, a call to repent, and the terrible consequences if they would not repent. Jeremiah told them to amend their ways and their deeds (v3). Don’t trust in deceptive words like, “we are God’s people or this is God’s temple”. God is only interested in their deeds, not their words. How could they use God’s name and still lie, cheat, steal, murder, commit adultery, and participate in idolatry?(v9-10). God told them to go up north to Shiloh where the Tabernacle used to be before the wrath of God destroyed it because of the “wickedness of my people” (v12). The rest of the chapter is about their evil practices, two of which jumped out at me—in v.30 they put idols in the Temple, and in v.31 they even participated in infant sacrifice. What would be the outcome of such abominations? Verse 34 says there will be no more joy or gladness in Jerusalem, “for the land will become a ruin.”

The Potter and the Clay—Jeremiah 18

If we try to relate to Jeremiah, his crying out to God, and his questions to God like “Why did you ever send me?” or “Why was I ever born if this is the result?”, we must come to grips with the sovereignty of God and His omniscience. God impressed this upon Jeremiah in Jer.18 by having him visit a potter’s house, but there are lessons here for all of us. The potter was making a vessel out of clay but it was not suitable so the potter remade it. This was a parable in action that corresponded to Jeremiah’s questions as well as ours. Verse 6 tells us that God is the potter and Israel was the clay. If the clay was not suitable, didn’t the potter have the right to remake it? Absolutely, this is why the potter has exquisite works of art out front in the display case which were at one time just lumps of clay in the back. The difference is that the potter transformed the mess into something useful and attractive. How do we balance God’s sovereignty with man’s responsibility? Verse 8 explains that if they repent (their choice), God will relent from judging them harshly, but after the vessel fired is fixed, it must be shattered.