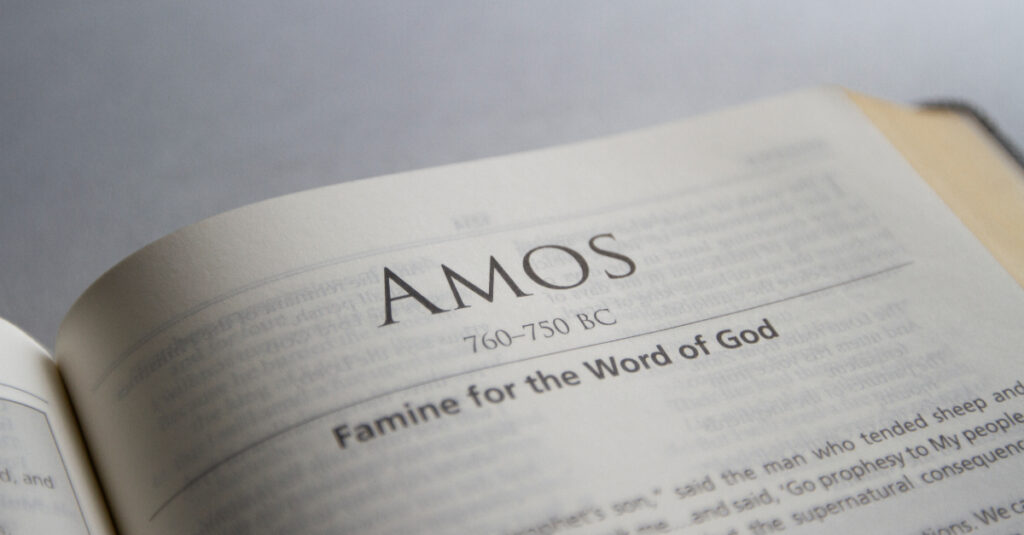 Amos was not a prophet by vocation. He had been a manager of shepherds and a grower of figs in a rural area near Tekoa, which was 10 miles south of Jerusalem. For reasons known only to God, He chose Amos to go way up north to Bethel to be God’s spokesperson to the northern kingdom of Israel. At that time, Bethel was the residence of the King of Israel, and it was a center of idolatry. God called him to be a prophet for a relatively short period of time. Many of the other prophets spoke for 30-50 years, but Amos probably delivered his message for only about a year. Archeologists have found evidence of a major earthquake about 760 BC. Amos’ ministry was about two years before an earthquake according to Amos 1:1. If this was the same one, his ministry was in 762 BC. Other theologians date it during the reign of King Jeroboam II who ruled from 794 to 753 BC. Amos was called by God to deliver a very unpleasant message that their army would be destroyed, and not long after that the whole country would go into exile. In fulfillment, Assyria invaded Israel, defeated it, and took the people into exile about 722 BC.

The prophets had a tough job. No one wants to confront people and tell them they have failed to meet God’s standard, and so would come under harsh judgments. Exposing false theology and useless religious worship is not a popular vocation. How do you break the news to a proud religious people that their supposedly good lives do not please God at all? Amos’ job was to break the news of God’s view of their sin and apostasy with a goal of getting them to respond with contrition and repentance so they would be spared. The prophet prayed for his listeners, and wept over what he saw coming and knew could be avoided. He tried to motivate Israel to respond to God’s message.

After the rule of Solomon, about 931 BC, there was a civil war in Israel as the northern tribes broke off from the son of Solomon to form their own country. The northern tribes became Israel, and the southern tribes became the Kingdom of Judah with Jerusalem as capital. The new capital of Israel became Samaria, and a new Temple was built in Bethel. The king put idols in the Temple and used non-Levitical priests. Thus a new religion of perverted syncretism and idolatry mixed with the worship of the true God of Israel was born, and displeased God greatly. Nevertheless, during the reign of Jeroboam II, Israel had expanded its borders and was prospering in its commerce. An affluent class of merchants and politicians had great influence in Israel as greed and corruption became the norm. The people continued to be religious, but not according to the truth. They had pride in their self made religion, and a sense of well-being because of their success and their past heritage as chosen people of God.

The first six prophecies of judgment delivered to Israel by Amos were concerning the surrounding nations. I’m sure those six were well received since they were or had been enemies of Israel, but the seventh prophecy of judgment was against their brothers in Judah, and the eighth was against Israel itself. In Amos 1:3-5, he predicted that the Arameans (modern day Syria) of Damascus would be defeated and exiled. Next, the Philistines in Gaza would be destroyed completely. Their heinous sin of human trafficking is mentioned as the grievance God has against them. We are told that their end and destruction would be complete. In 1:9-10, he condemns the Phoenicians of Tyre for the same sin of brokering captured people into slavery. Then Edom is condemned for its rebellious deeds, and Ammon would be defeated because it massacred defenseless pregnant women when they attacked Gilead. The sixth oracle against a surrounding nation is in Amos 2:1-3, and is directed against Moab. Interestingly, the peoples of Edom, Ammon, and Moab were related to Israel. The Edomites were descended from Esau who was the red haired brother of Jacob, the Ammonites were descended from Lot, the nephew of Abraham, and the Moabites were also descendants of Lot by his oldest daughter. The point of these predictive judgments was that God knows exactly what the evil nations are up to, and God will hold them accountable.

In Amos 2:4-5, Amos gave a prophecy against Israel’s closest relatives in Judah. Judah had broken the covenant with God and adopted the culture and religion of the Canaanites. I’m guessing that so far the audience in Samaria and Bethel had been agreeable to the message, but now in Amos 2:6-16, he got personal with a message of coming judgment against Israel. God had graciously cared for Israel in Egypt when they were oppressed, but now Israel was oppressing and corrupting the priests and prophets of God. Therefore, Israel’s military that they depended on will be defeated.

In Amos chapter 3-6, he delivered three sermons, all beginning with the phrase, “Hear this word”. The first sermon announces judgment upon Israel because of their iniquity. They think they can rest on their history and traditions of being God’s chosen people, but the prophet is clear that their status comes with great responsibility. Their evil deeds prove that they deserve punishment. The second sermon in chapter four, reveals the crimes in Israel and God’s attempt to get their attention through famine and drought, yet they did not respond. Therefore God will overthrow them as He did Sodom and Gomorrah. The third sermon in ch.5-6, lists the sins of Israel, and calls on them to repent. Unfortunately, they hate integrity and justice, so God would end their prosperity and send them into exile. Amos lamented their complacency, false security, pride, and indifference. The conclusion is that God would raise up a powerful nation against them to defeat them and send them into exile.

The Five Visions of Amos

In Amos 7:1-9:10, the prophet wrote of five visions he had concerning future judgments upon Israel. These visions are all images symbolic of judgment. Amos was able to intercede for Israel and prevent the first two visions of locusts and fire, but the third vision of the plumb line shows God measuring Israel to see if they are upright. Can they pass the test? Not a chance! After this, the corrupt high priest Amaziah (7:10-17), orders Amos to leave and go back to Judah, but because of this poor response from Israel’s leaders, Amos pronounces a terrible prophecy against Amaziah. Amos’ fourth vision sees Israel as a basket of over ripe fruit that is rotten, and his fifth vision shows God guaranteeing Israel’s demise.

The Promise—the Golden Age of Israel

Amos 9:11-15 ends the prophecies with the good news of Israel’s future restoration. God promised to restore the people, reinstate the kingly line of David, and give Israel peace and prosperity. The good news is that since all these other prophecies of doom came true, it is certain that this comforting promise of a golden age will also come true. Humanists have always dreamed of a Utopia or Xanadu, and even tried in vain to create perfect states. It never worked because sinners are unable to achieve it. Only God can accomplish this in His coming kingdom. What good would it do for God to set up a kingdom of sinners? First, God had to overcome sin so that the people of the kingdom would be righteous, and God accomplished this by sending His Son, Jesus Christ into the world to personally atone for sin.

Many people object to the prophets’ message of punishing judgment from God. They say that their view of God as loving, gracious, and forgiving prevents that type of judgment. Yet, they fail to see that God is also perfectly holy and just, and cannot just overlook sin. I like Psalm 51 written by David after his time of sin and punishment from God. David confessed and recognized his sin, but also David recognized God’s righteous discipline upon him. In Psalm 51:4, David wrote that all sin is essentially against God and must be atoned for. Even though you may think he sinned against Bathsheba and Uriah, on the grand scale it was against the law of God. David not only threw himself upon the mercy of God, but recognized that God is just and God is right to judge us. God is completely justified to discipline me now in this life, and God is also justified in His eternal judgments. Praise God that His love and compassion has moved Him to send Jesus to die for my sins so that His eternal judgment may be propitiated—His holy demands have been satisfied.