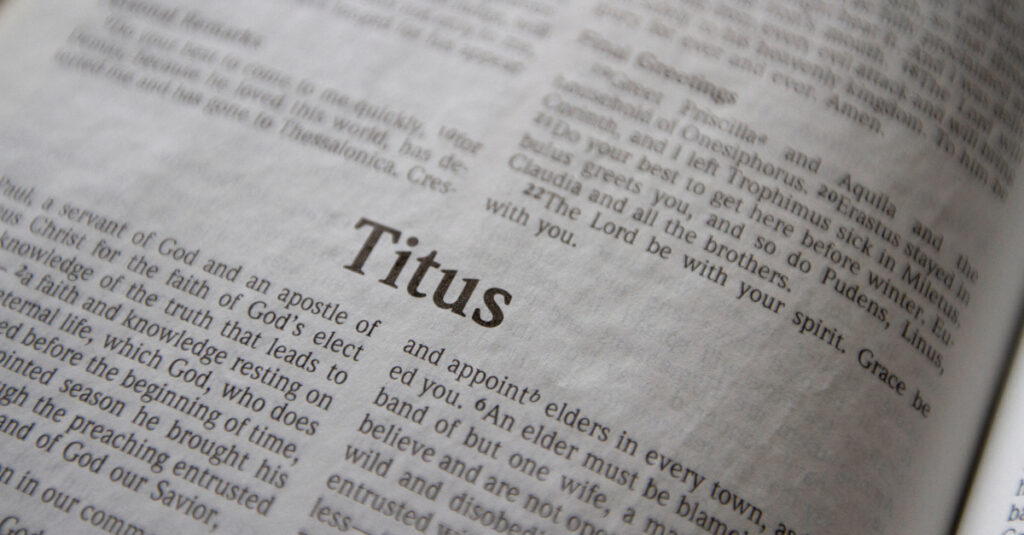 Titus 2:11-15, The Appearing of God’s Grace by CHARLIE TAYLOR

In Titus 2, Paul presents the “appearing” of two acts of grace by God. The first act was the first coming of Christ through the incarnation when God took on the flesh. It was God’s gift by which we were saved from the penalty of sin. The Greek word in the New Testament that we translate into grace is “charis”, which is used several hundred times in the New Testament. It is also often translated favor depending on the context. What does Paul mean by grace here in Titus 2:11? Grace is God’s free gift that we do not deserve, nor did we earn in any way. It is God’s unmerited favor offered to the human race. All have sinned, therefore all of us need a Savior that only God could provide. Why, because we need a Savior who is without sin, and a Savior who can make an atoning sacrifice for sin of infinite value. God in the flesh, AKA Jesus Christ is the only one who fits that bill!

Why is this so hard for the human race to grasp, understand, and believe? Because it is contrary to every other system of merit in which we perform. We make money by earning it. We made our grades in school by studying (supposedly). We made the athletic team by practicing and being good enough. There is no such thing as a free lunch, and most people think that God helps those that help themselves. That is all bred into us, and it is our experience in all other fields of endeavor. But grace is contrary to human experience and human wisdom, which makes it “Amazing Grace”. Right?

John’s mother died when he was 6 years old, and he was basically an orphan since his father was a sailor always at sea. When he was 11, his father took him to sea as a sailor where he experienced such wickedness and debauchery as to ruin a young lad. Later he became involved in the slave trade, and eventually became a captain of a slave ship. Some missionaries gave him a book by Thomas a Kempis called THE IMITATION OF CHRIST, which he read. It served the purpose of planting seeds such that later when his ship encountered a violent storm, he actually prayed to God for mercy. At the age of 39 he was saved and went into the ministry. Eventually he became a force alongside William Wilberforce in England to abolish slavery. In 1779, he collaborated with William Cowper on a volume of hymns including “Faith’s Review and Expectation”, which was later known as “Amazing Grace”. His song is the song of every one of us sinners who were lost and found by God, who were blind spiritually, but now we see because we have been saved by the grace of God.

Let’s talk about and compare these three words. Justice would be getting what you deserve. Please don’t give me justice! I guarantee you John Newton did not want justice, and I am certain that the Apostles of the New Testament did not want justice. Paul said that “I am the foremost of all sinners” (1 Tim.1:15). Peter boasted he would never deny Jesus, then that night denied Him three times, plus Jesus told Peter in Matt. 16:23, “Get behind Me Satan”. No one should want justice from God for themselves. Mercy is God not giving us what we deserve. Romans 6:23 says, “For the wages of sin is death, but the free gift of God is eternal life in Christ Jesus our Lord.” Therefore apart from God’s grace we deserve spiritual death, but God’s mercy is in not giving us what we deserve. Purely out of love God has provided the means by which there can be justice for sin through the sacrifice of Christ on the cross so we can have that mercy that God is offering. The incarnation, sinless life, sacrificial death, and atoning work of Jesus Christ is the GRACE or free gift of God to all who believe.

Grace Instructs Us to Deny Ungodliness

In Titus 2:12, Paul tells the churches that grace transforms the believer such that he/she knows in their heart that they should deny ungodliness and worldly desires, and instead live sensibly and righteously in the here and now. The fallen world we live in and the fleshly desires still alive in our body conspire to lead believers astray, but saving grace teaches us to say no to sin and yes to godliness. Grace is a strengthening gift of God. He changes our hearts so that we actually have a desire to obey Him and do good works. When Jesus died for us we were still sinners, but He loves us too much to let us stay that way. Therefore, by the grace of God His Spirit transforms us from the inside out. Surveys say that about half of professing Christians have the wrong idea that you have to be transformed in order to be saved. NO, we are progressively being transformed once we become saved. We are saved from the penalty of sin at a point in time of belief in Christ. Then we begin the process of being saved from the power of sin. People might wrongly think God is like Santa Claus “making a list and checking it twice, going to find out who is naughty and nice”. Then the nice ones get the gifts, but that is not even right at Christmas because everybody knows the rich kids get the best and most gifts. God offers His grace freely to all sinners, and those who believe are transformed.

Some may ask, “What else do we need to complete it?” or “Do we have the security of our salvation, or can we lose it?” God’s grace is sufficient alone to accomplish and complete our salvation. We can add nothing to it because it is the work of God that accomplishes our salvation. As Paul wrote in Romans 8:35-39, nothing can separate us from the love of Christ. Who or what can undo what God has done? In all the salvation passages, the work necessary for us to be saved is done by God, and we passively receive and believe in it. Therefore God’s gift has accomplished for us what we could not do for ourselves. You might then inquire what the relationship of good works is to salvation. Ephesians 2:8-9 says “For by grace you have been saved by faith and not of yourselves, it is a gift of God, not as a result of works”, but then verse 10 says “For we are His workmanship created in Christ for good works”. This means that it is God’s plan that after we are saved from the penalty of sin the result and consequences of God’s new spiritual person are good works. Still the skeptic might say, “If its true you can’t do any work to be saved, and once you are saved you can’t lose it, then why not just eat drink and be totally selfish? Paul answers that well in Romans 6:1-11 where he asks and answers, “Are we to continue in sin that grace might abound? By no means! How can we who died to sin still live in it?” Paul went on to say about eight different ways that the old carnal spiritually dead person is gone, and we are spiritually alive. We are now living in an intimate relationship with Jesus Christ so how can we be characterized as the old person? Why would we want to continue to live in that filthy miserable state without any meaning or purpose? It’s now illogical to live sinful lives because that’s not who we are now in Christ.

In Titus 2:13, Paul wrote of another “appearing” of a different act of God’s grace that is equally important. The first appearing of God’s grace was the first coming of Christ that we read about in the New Testament. Currently, we are waiting for the second appearing of God’s grace, and this is our “blessed hope”, which is “the appearing of the glory of our great God and Savior Jesus Christ”. Almost every book in the New Testament teaches about the second coming of Christ, and all the N.T. authors believed in it. When Christ comes back He is going to end this world as we know it, believers will have been resurrected, and there will be a judgment. I just read an amazing article that a large number of professing Christians do not want Jesus to come back any time soon or don’t want Him to come back at all! There were at least five reasons given for why Christians don’t want Jesus to come back. First, they are too comfortable—their life is just too good. I look around America today and think maybe we have gotten comfortable in materialism. Secondly, people say they are not ready yet. They need time to get their lives in order, put together an inheritance for their kids, see their daughter get married, etc. Thirdly, and mostly, they love this world and everything in it. They are like Lot’s wife and daughters when God was going to destroy Sodom. The angels had to force them to leave, and Lot’s wife looked back longingly at her beloved Sodom (Genesis 19:16-26). The fifth reason is very disturbing to me, which is they love their sinful lifestyle. I actually used to play golf with a guy that I witnessed to several times who would not respond because he was a heavy drinker and womanizer. He believed every thing I shared with him about the Gospel, but he feared he would have to give up his lifestyle. The fifth reason given was the only virtuous one–they wanted more time for others to be saved. Of course that is why God is delaying the second coming.

It should be obvious to Christians that we should look forward to the second coming with great joy and expectations because it will mean the end of all evil, the end of all death, and all believers will receive their glorious resurrection bodies. Just imagine your new supernatural heavenly body whole in every way that will never age or wear out again. Some people fear that heaven will be boring, but all the glimpses in the Bible we get reveal just the opposite. It will be dynamic, exciting, active, joyful, and wonderful in every way. Consider that in the parables Jesus told about rewards in heaven, people were rewarded with exciting service-jobs, cities to rule. Now in a fallen world, work can be tedious hard and boring, but then in heaven it will be rewarding, exciting, and fulfilling. IN 100 YEARS WHAT IS GOING TO MATTER TO YOU THEN? The only thing that’s going to matter to you is the grace of God!