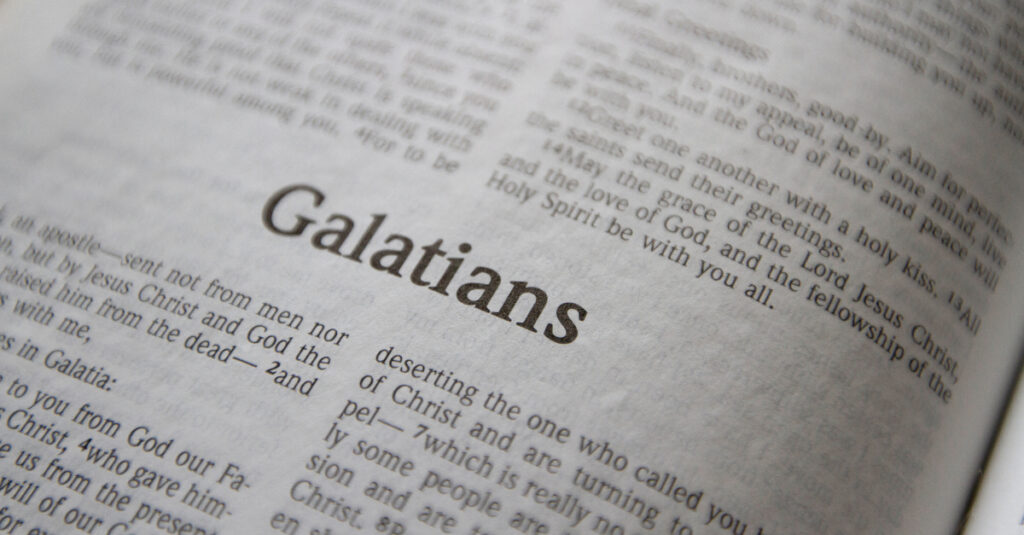 Jeremiah had prophesied that the New Covenant, which the Messiah would introduce, would be a liberating covenant. For centuries Israel had failed to keep the Mosaic law. The guilt and hypocrisy had built up, but both Jeremiah and Ezekiel said the New Covenant would free God’s people from the burden of the law. God would write His law on our hearts, and He would give His Spirit to enable us. In Ezekiel 36:26 God said, “I will give you a new heart and put a new spirit within you…I will put My Spirit within you and cause you to walk in my statutes.” The difference between the Old Covenant and the New Covenant is the primary concern of the book of Galatians.

Martin Luther was so moved by Paul’s letter to the Galatians that he said, “The Epistle to the Galatians is my epistle. To it I am in wedlock.” Therefore Galatians is often called “Luther’s Book”. Merrill Tenney wrote “Christianity was in danger of becoming just a Jewish sect, but Galatians separated Christianity from Judaism forever. It was also the cornerstone of the Protestant Reformation, because salvation by grace alone became the dominant theme of the preaching of the reformers.” The message of Galatians is that the Christian is delivered by Christ from the bondage of sin and religious legalism. If anyone professes Christ yet holds onto a doctrine of salvation by works or obedience to the law, then he is doomed to live a life of guilt and hypocrisy. Israel proved for over 1400 years that perfectly keeping the law as a way of salvation was doomed to failure—this is an important theme of the Old Testament. When Christ came, His atoning work on the cross freed us from the burden of the law, and the guilt of failing to live up to God’s righteous standard. Anyone in the churches in Galatia still trying to please God by works, or following a religion of self justification was defeating and rejecting the grace of God offered freely to all who believed.

Galatians is unique amongst Paul’s letters in that it contains no thanksgiving section in the introduction. In all his other letters he thanked God for the church’s faith or love or good deeds or something, but here the thanksgiving is absent. Instead, Paul bluntly gets to the point of his dismay concerning what was seriously wrong in the churches of Galatia, “I am amazed that you are so quickly deserting Him who called you by the grace of Christ, for a different gospel; which is really not another, only there are some who are disturbing you and want to distort the gospel of Christ.”

On his first missionary journey Paul and Barnabas had planted numerous churches in Galatia, a province of Asia Minor (now Turkey). Acts 13-14 mentions the cities of Pisidian Antioch, Iconium, Lystra, and Derbe. Paul had gone back to his home church of Antioch, Syria only to receive news from Galatia that some false teachers had slipped in behind him and preached “a different gospel” from the true pure gospel of Jesus Christ that they had first believed there. The very heart of the gospel was being sneakily undermined by false teachers. They were using the name of Jesus, quoting from the Scriptures, and claiming to be Christians, but they had subtilely added works to the grace of God, They were saying, “Sure you were saved by grace and it was received by faith alone, but you must also be circumcised, and eat kosher food, and follow the laws of Moses in order to be saved. Paul had left solid disciples in the area when he left who were reporting the serious effect these false teachers and their false message was having on the churches. Paul considered these new believers in Galatia his spiritual children, so he was greatly alarmed. Can you imagine leaving your children for a long trip only to hear that your children were being taught lies while you were gone? Paul could not write this letter fast enough, or get it delivered soon enough. It was an urgent plea to reject the false teachers, and return to the purity and simplicity of the gospel of Jesus Christ.

This term for the false teachers comes from the fact that they were Jews who had been born and raised with the Jewish religious traditions and found it difficult to release themselves from the religious burden. Instead they tried to just incorporate Christ into their religion. The word Judaize comes from only one usage in the book of Galatians in Gal.2:14. Paul asked Peter and Barnabas, “how is it that you Judaize the Gentiles?” Your English translation probably renders it, “how is it that you compel the Gentiles to live like Jews?” Paul used the Greek word ioudaizo which was used in other Greek literature to mean “to adopt Jewish customs”. Even though this is the only time in the New Testament the word is used, from that time on all commentators have called the false teachers Judaizers. Remember that the Christian church in Jerusalem was huge and made up of only Jews, therefore this issue of circumcision and kosher eating had never come up before in the church in Jerusalem. It was only with the influx of Gentiles that this became a source of contention. Fortunately, the issue was settled not long after Paul wrote this letter because Paul and Barnabas went up to Jerusalem for a showdown. You can find this episode of the early church in Acts 15. All the Apostles, elders of the Jerusalem church, and other leaders like Paul were there, and it was decided by a landslide that Paul was correct, it was not necessary for Gentiles to be circumcised or follow the Jewish traditions.

Paul’s accusation to the Galatians was that they were considering “another gospel”, meaning a means to salvation in opposition to that which Paul had preached to them. It is necessary to first establish the true gospel that Paul delivered to them as the apostle of Jesus Christ. Paul gave a short version in Gal.1:3-5, then repeats it in passages like Gal.2:16, “knowing that a man is not justified by the works of the law, but through faith in Jesus Christ, even we have believed in Jesus, that we may be justified by faith in Christ, and not by the works of the law, since by the works of the law shall no flesh be justified.” God has stated it, and Israel’s experience in the Old Testament (the history of Israel) has confirmed it. Paul wrote it again in Gal.3:11, “no man is justified by the law in the sight of God, for God has said, ‘The just shall live by faith’”.

The other false gospel, let’s call it the ungospel, that Paul warns about in Gal.1:6-9 finds the work of Christ on the cross inadequate to accomplish grace and peace. Therefore they must add law-keeping, good works, traditions, etc. to their faith with the result that they nullify grace altogether. The ungospel is man made and man pleasing according to Gal.1:10-11. The ungospel relies on what men do in keeping laws, traditions, and cultic practices. “When law is added to grace, His grace ceases to be grace”(Romans 11:6). In Galatians 3-5, Paul proved through the history of Israel that the law served to reveal our sin nature as a tutor or a teacher(3:24). The law of Moses is good and perfect, but man proved that apart from God, he could not keep it because of the weakness in our flesh. Therefore salvation was always a matter of God’s gracious provision, and not man’s performance.

How Strong is the Grip of Tradition ?

Tradition, peer pressure, and the pull of family is a powerful force. Even Peter and Barnabas were carried away by hypocrisy because of it. Paul wrote of a confrontation he had with even these great leaders of the church in Gal.2:11-14. Peter had been visiting Antioch (a Gentile church), when a group of influential pious Jews visited. Peter and Barnabas had been eating with and fellowshipping with Gentiles and probably eating Gentile food. When these pious Jews who still observed all the traditions and laws came to Antioch, Peter withdrew from the Gentiles and held himself aloof because he feared the judgment of these men from Jerusalem. Next thing you know, Barnabas and all the other Jewish Christians in Antioch joined Peter in this hypocrisy, and they had a schism in the church. Therefore Paul was not diplomatic about chastising Peter in public by saying, “If you, being a Jew, live like the Gentiles and not like the Jews, how is it that you compel the Gentiles to live like Jews?” Peter and the others stood convicted and ashamed, and it gave Paul yet another opportunity to share the true gospel.

What About the Place of Obedience and Good Works ?

Paul devoted chapter 1-4 in Galatians to the issue of the means of being justified before God, or our initial salvation. In chapter 5-6 he wrote about how we are supposed to live as believers in Christ. Though we are forgiven, we still live in a fallen world, and still must struggle against the sinful desires in our flesh as Paul stated in 5:17, “the flesh sets its desire against the Spirit, and the Spirit against the flesh, for these are in opposition to one another, so that you may not do the things that you please.” Paul stated in 5:13, “for you were called to freedom, but don’t let your freedom turn into an opportunity to sin”. What is the answer to this dilemma? Paul gives us the solution in verse 16, “walk by the Spirit and you will not carry out the desire of the flesh.” The good news is that at the time of your salvation, God gave you His Holy Spirit to enable you to live now. The battle then is to fill our lives, our activities, and our minds with the things of the Spirit. Entrust your life to Him, follow Jesus, live by faith. Paul said it well in Gal.2:20, “it is no longer I who live, but Christ lives in me; and the life which I now live I live by faith in the Son of God…”. What will be the result of walking by the Spirit? Paul reveals the fruit of this life in 5:22, “the fruit of the Spirit is love, joy, peace, patience, kindness, faithfulness, gentleness, and self control.”
CHARLIE TAYLOR