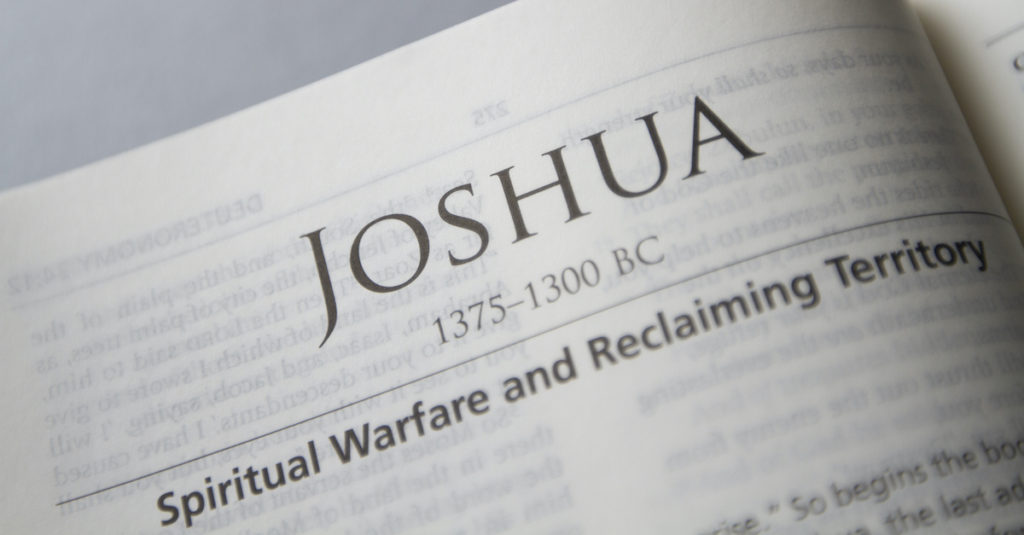 Joshua 1: Be Strong and Courageous

Joshua 1: Be Strong and Courageous

After Moses led the children of Israel out of slavery in Egypt, he appointed Joshua as the military commander in Exodus 17:9 to fight the Amalekites. Joshua proved himself to be an able and faithful commander, and later in Ex.24:13 we read that Joshua is the trusted servant of Moses. After the giving of the Ten Commandments in Ex.20, Moses went up on the mountain for forty days to get further instructions, and Joshua accompanied him. Meanwhile the people of God had an orgy and worshipped an idol. In Exodus 32:17, when Moses and Joshua came down the mountain, it was Joshua who asked innocently, “What is the sound of war in the camp?” The raucous loud party they were having was the last thing faithful Joshua expected. In Exodus 33:11, Moses would go into the tent where the glory of God would speak to him, and Joshua would stand right out side guarding the entrance. After God had forgiven the people for their gross sin, Moses and Joshua led them to the southern border of the “promised land” that God had promised to give them. In Numbers 13, at Kadesh Barnea, God directed them to send 12 spies into the land of Canaan to map out the land. Joshua represented the tribe of Ephraim, and here in Nu.13:16 we see that Joshua’s name was Hoshea, but Moses renamed him Joshua. Hoshea meant “salvation”, but Moses added the abbreviation of God’s name to form Joshua, meaning “God is salvation”.

When the spies came back, ten of them had a very scary negative report that the cities were too fortified to conquer. The people were too big and well armed, and they outnumbered Israel. Only Joshua and Caleb said “We should by all means go up and take the land”, for God promised it and God would be with them. In Nu.14:6-9, Joshua pleaded with the people to obey God, but the stubborn people turned on them and threatened to stone Joshua and Caleb. God’s judgment against Israel was that the people of Israel would wander in the wilderness for forty years until every adult but Joshua and Caleb had died out. Thus only the children, the second generation would go into the “promised land” (see Numbers 32:11-16). Sure enough forty years later in Numbers 26:64-65, Moses took a census and not a single man or woman who had disobeyed at Kadesh Barnea was alive, only their children were left to go into Canaan. God had told Moses that he would die before they took the land of Canaan, so in Nu.27:16-19, Moses at God’s direction commissioned Joshua to be the new leader to take Israel into the land.

In Deuteronomy 31, Moses gave his farewell address to Joshua and the people and for emphasis Moses said three times “Be strong and courageous”. No wonder this was emphasized because the first generation had acted just the opposite when they were commanded to go in and take the land. Instead, they had been weak and fearful, not to mention disobedient. Joshua would complete the redemption of Israel begun in Exodus. Moses had redeemed Israel out of Egypt, but now Joshua would redeem Israel into the land of Canaan. The most important reason God gave for Joshua and Israel to “BE STRONG AND COURAGEOUS” was that God would be with them. God’s presence and His promise guaranteed their success.

We know that Joshua wrote the book of Joshua for many reasons. Since “we” and “us” is used, it had to be an eyewitness participant. An early author is required because Rahab of Joshua 6:25 was still alive. In Joshua 15:63, the Jebusites were still in Jerusalem so it had to be well before David conquered it. The oldest manuscripts are titled Joshua and all Jewish tradition ascribes it to Joshua. Most importantly in Joshua 24:26 the text says “Joshua wrote these words”. Critics who believe it was written about a thousand years later say Joshua could not have written it because it describes his death in 24:29, but I’m sure that an editor could have added that.

In Deuteronomy 7:1-3 and 20:16-17, God commanded through Moses that Joshua and Israel should “utterly destroy” all the Canaanites, and “you shall not leave alive anything that breathes”. This seems harsh, but God gives an important reason that if the Canaanites are left in the land they will corrupt the Israelites. The children of Israel were called to be a “holy people for God’s own possession”, but if they intermarried or intermingled with the evil Canaanites it would be just a matter of time before they too would be immersed in idolatry. If we go back 500-600 years earlier in Genesis 15:13-16, we can see that God also foreknew that the sin of the Amorites (largest tribe of Canaanites) would eventually reach a peek of depravity that they would be irretrievably lost, and God’s holiness would require that He destroy them just as He destroyed the world during the time of Noah and later destroyed Sodom for their heinous sin. Therefore God’s command to “utterly destroy” the Canaanites was both a judgment against the Canaanites and a fulfillment of His promise to Israel to give them the land.

In Joshua 1:1, we see the link between the book of Deuteronomy and Joshua—“After the death of Moses”. Moses had commissioned Joshua as his successor and given him God’s command to go into the land, be strong and courageous, and take the land for Israel. Joshua 1 picks up where Deuteronomy 34 left off, so in that since Joshua is a sequel. Now Moses has passed away, Joshua has filled the leadership vacuum, and God speaks to His new mediator to the people, Joshua. In verses 2-4 God repeats the command to lead the people into the land God is giving them. From God’s viewpoint it is a done deal, they just have to step out in faith, cross the Jordan River and do it. The land is God’s to give, and it is time to fulfill the promises He gave Abraham back in Genesis 15:18. The boundaries of the land are given just the same as God promised before. The north, east, and west boundaries of the land God gave Israel are clear and definite, but the south boundary—not so much. Amazingly, the north boundary is the Euphrates River way up in what is now Iraq, the east is the Jordan River, and the west is the Mediterranean Sea. Some people think the south boundary is the Nile River since it says the river of Egypt, but others think it is a line between the south side of the Dead Sea and the Med. Sea. God gave Joshua the maximum encouragement in v.5 by saying the enemy will have no chance against you because I WILL BE WITH YOU. Joshua’s part is to step out in faith while God would actually win the victories for them. I actually checked to see if God had ever given any of the other Bible characters this promise of “I will be with you”. Guess what, God said it or something like it to every believer in the Bible, including the church in the great commission of Matthew 28:20, “lo, I am with you always, even to the end of the age”.

Meaning of “Be Strong and Courageous”

Four times in Joshua 1:6, 7, 9 and 18 God repeats the exhortation to be strong and courageous. Clearly after the disaster of fearing the Canaanites at Kadesh Barnea (Nu. 14), the apprehension that Israel will blow it again requires this repetition for emphasis of being courageous. After all, the Canaanites still outnumber them, and they are still bigger and have better weapons. They face a great problem their parents couldn’t handle. Their parents thought the problem was too big, but it was just cleverly disguised as an impossible situation. Therefore what is God’s formula for encouragement through telling them to be strong and courageous? I can think of at least six reasons to have courage:

Joshua Passes on God’s Word to the People

In Joshua 1:10-11, Joshua orders the divine command to prepare to cross the Jordan River. Then in v.12-18, Joshua addressed the so-called Transjordan tribes of Reuben, Gad, and the half tribe of Manasseh. In Numbers 32 we read that these tribes liked the good grazing land on the east side of the Jordan River so they asked for permission to settle there. It was decided that they could, but with an important proviso—they had to lead Israel into battle on the west side of the Jordan until it was conquered, then they could return. The Transjordan tribes agreed and even added that if any of their soldiers rebelled against Joshua’s orders, they would be put to death. Then they added their own encouragement to Joshua—“only you be strong and courageous” as our leader.

Israel had journeyed to Egypt to escape a terrible famine in Genesis 50:22-25, and his son Joseph died in Egypt. Before he died he prophesied that God would bring them back to the land He promised Abraham to give to his descendants. Then the children of Israel lived in Egypt as slaves doing hard labor for 400 years. After Moses led them out of slavery in Egypt in Exodus 13-14, they had to wander in the wilderness for 40 years with no rest. Now in Joshua 1:13, 15 their new leader promised them rest in the promised land that God will give them, BUT they had to commit themselves and totally believe in God. In Hebrews 3-4, the New Testament authors used the rest promised to Israel as a type of the rest God has promised those who believe in Christ. The first generation of the Exodus did not believe or obey God’s commands to go into the land—they thought the risk was too great so they disobeyed and never got “the rest”.

The author of Hebrews 4 challenges us today to believe in Christ and obey God’s Word so that we will experience God’s promised rest. The good news message came to Israel, but the message they heard did not benefit them because they did not believe it or obey it. They did not respond in faith so they missed the rest. Therefore Hebrews 4:11 exhorts us today to strive to enter that rest by believing and obeying the Word of God. The author is speaking to the Church, and therefore is indicating that some in his audience lacked the faith and obedience necessary to enter into that rest. The “rest” that Joshua promised his people was a safe haven, a freedom from threat, security, and well being that they had never known before. I think the rest Hebrews 4 is offering us is that rest that we are guaranteed in heaven if we fully believe in Christ. Unfortunately many church-goers today profess belief, but that final judgment described in Hebrews 4:12-13 will reveal people’s true heart. “Let us therefore strive to enter that rest”.