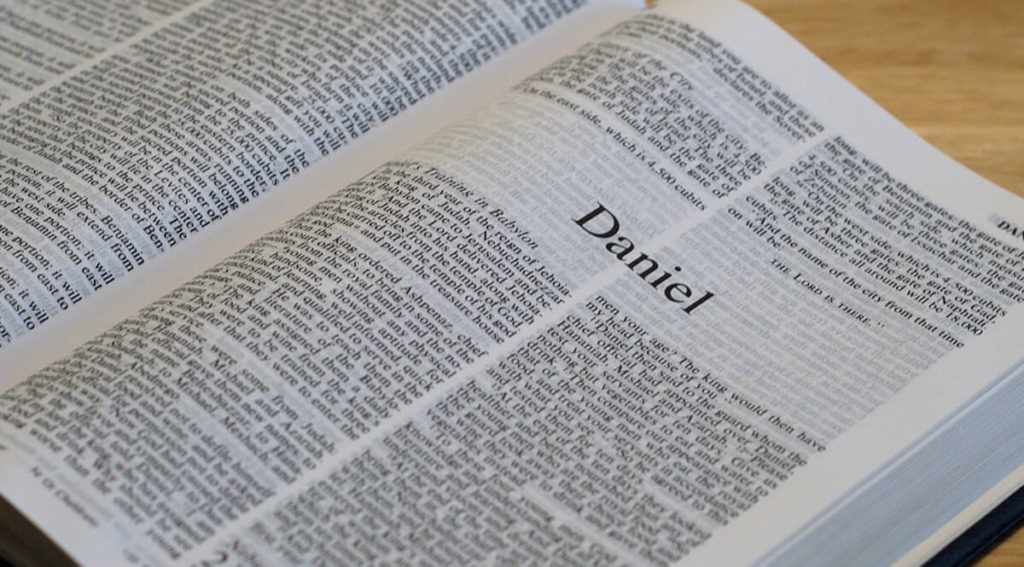 Daniel chapter 7 is a revelation by God through Daniel’s vision of the four great world empires that would rule over the world. It concludes in the climax of world history with the second coming of Christ and the setting up of His kingdom. Daniel’s vision occurred around 553 BC which was after Nebuchadnezzar’s death but before Babylon fell to the Persians. Earlier, King Nebuchadnezzar had a troubling dream detailed in Daniel 2. It also was about the four great kingdoms, but it was seen from a Babylonian perspective as a great statue, probably as the king saw himself. The different metals of the statue represented the four kingdoms. The visions of ch.7 and 8 came to Daniel, and were from a Jewish perspective. These Gentile warrior nations were like ferocious ravenous beasts. In Dan 7:3, these four beasts came up from the sea. The sea here represents the nations of the world, and the four beasts represent Babylon, Persia, Greece, and Rome. Babylon was the great power until 539 BC when the Medes and Persians took over Babylon. Persia then ruled that part of the world until defeated by Alexander the Great about 336 BC. When Alexander died at a young age, his four Greek generals divided up the lands he had conquered. The Greek ancestors of General Ptolemy and General Seleucus ruled over Egypt and the Middle East until Rome took over in the first century BC.

In Dan.7:4, Daniel sees the kingdom of Babylon as a lion with the wings of an eagle. In the ruins of the ancient palace of Babylon, archeologists have found that winged lions guarded the gates of the palace. In the vision, the wings of the lion were plucked which probably symbolize Nebuchadnezzar’s humiliation in chapter 4 when he was broken by God and made to know that he was just a man under the authority of God. In Dan.7:5, the succeeding kingdom of Medo-Persia is seen as a bear with three ribs in its mouth which probably represent the three parts that they conquered- Babylon, Lydia, and Egypt. The raised up side of the bear symbolizes the greater power of Persia over the Medes. The third kingdom in verse 6 is represented by a leopard with four wings and four heads. The leopard was known for its ferocity, speed, and agility which were all characteristics of the Alexander the Great conquests of the known world before the age of 32. We don’t have to speculate who the second and third beast are because Dan.8:20-21 name them both. The four heads of the third beast represent the four Greek generals of Alexander who divided up the kingdom after Alexander’s death. In Dan.8:22, we learn that these four Greek kingdoms arise after the first king (Alexander) died.

In Dan.7:7-8, he sees in his vision the fourth beast which dominates chapter seven. The first three beasts get three verses, but the fourth one gets the rest. Most theologians agree that the fourth beast stands for Rome. It was a different kind of beast that was more dreadful and terrible and strong. Rome arose more slowly than the others but was much larger and stronger and lasted much longer. This beast had ten horns with another horn coming up among them. Three horns were ripped out, and the new horn had eyes like a man and a mouth speaking great boastful things. If we compare this to Revelation 13:1-2, we see a remarkable resemblance to the evil blasphemous world ruler of the end times we refer to as the Antichrist. In Revelation, John also saw a beast coming up out of the sea with ten horns and speaking boasts and blasphemy against God. When it comes to this fourth beast, it is difficult for theologians to agree if he represents the Roman conqueror who besieged Jerusalem in 70 AD, and destroyed the Temple and the city, or the Antichrist of Revelation 13 who will take power during the end times that precede the second coming of Christ. Because John wrote Revelation after Jerusalem was destroyed, and the Antichrist that he spoke of will be destroyed by Jesus when He comes back, I prefer the end times beast. The similarities of Daniel’s description and John’s are very close, and I believe are referring to the same guy.

The Ancient of Days

In Daniel 7:9-10, he has a vision of heaven just before the end of the world. Daniel saw God on His throne in all His blazing glory. All the angels and saints in heaven were worshipping and ministering to God. Then the Judge of the world convened His court of judgment and the records of the works of men were opened. Then Daniel heard the blasphemy and boastful words that the “horn” or fourth beast was speaking, but as he looked the beast was killed and his body given over to be burned with fire. This seems to be identical to the account in Revelation 19:11-20 of the coming of Christ as the conquering King who captured the beast and threw him into the Lake of Fire.

The next thing that Daniel saw in Dan.7:13-14 was the coming of the Son of Man to be presented before God. Then God will give Him “dominion and glory and a kingdom”. Unlike the previous kingdoms of men that Daniel saw as beasts, the Kingdom of God will be eternal and never pass away. Who is this Son of Man that is at the throne of God? Jesus repeatedly referred to Himself in His teaching as the Son of Man in fulfillment of Daniel’s prophecy. We have many titles for Jesus, but the one he used 81 times for Himself was Son of Man which He got from Daniel. In Matthew 9:6, Jesus healed the paralytic and then said, “the Son of Man has authority on earth to forgive sins…Rise, pick up your bed and go home.” In Matt.12:8, the religious leaders accused Jesus of breaking the Sabbath, and in His defense Jesus said, “the Son of Man is Lord over the Sabbath” meaning that Jesus is the judge of what the law means and requires. The clearest reference of Jesus as the Son of Man in Daniel 7:13 is found in Matt.26:64 where Jesus was answering the high priest who asked Him if He was the Christ, “Yes, it is as you say, but I say to you in the future you will see the Son of Man sitting at the right hand of the Mighty One and coming on the clouds of heaven.” This was Jesus relating Himself to Daniel 7:13-14.

The difficulty in understanding prophecy is that the prophet seems to jump over huge amounts of history, and you can’t always tell if he is talking about his own time, a future time, or the end time. It looks like Daniel took the human history of the four great kingdoms up to the first coming of Christ, and then leaped forward to the end of the age when the fourth kingdom will be revived and suffer its sudden and final judgment by Christ at His second coming. Then Christ will set up His eternal kingdom. Comparing the dream of Daniel 2 this is even more evident in Dan.2:44, when after the first four kingdoms, the God of heaven will set up His eternal kingdom which forever “breaks in pieces” the previous kingdoms of men. Daniel just skips over what we call the “church age” which began with the resurrection and ascension of Christ and the coming of the Holy Spirit, and will end with the rapture (resurrection) of the church. This makes sense because Paul made it clear that the church was a mystery that he was entrusted to reveal only after Christ was rejected by Israel. In Ephesians 3:4-12 Paul wrote, “the mystery of Christ which was not made known to men in other generations as it has now been revealed to His holy apostles…To me this grace was given…to bring to light what is the plan of the mystery hidden for ages in God…”

Theme and Purpose of the Visions

In the first chapter of Daniel we read that God gave Jerusalem and the Jews over to King Nebuchadnezzar. I’m sure the king thought he was really great and totally in control of his own destiny, but we see in every chapter and every story that God is soveriegnly in control. The gods of Babylon seemed to be more powerful because Babylon won the battle, but we know the truth that God was actually disciplining Judah by allowing Babylon to take them captive. We see in Daniel 2 that God has already planned the fall of Babylon to the Persians, and later will cause the fall of Persia to Greece. God is in control of history, and He has a master plan that is bigger than anything we could imagine. When all of His plans for all the evil kingdoms of the world have been fulfilled, then He will do away with all the kingdoms of men and set up His kingdom which alone is righteous and just.

Theologians struggle with the timing of these prophetic events, and differ on the identity of the beasts, especially the fourth beast and the little horn of Daniel 7:8. Is he the evil Antiochus Epiphanes who desecrated the Temple in Jerusalem in 164 BC, or is he the Roman General Titus who destroyed Jerusalem in 70 AD, or is he the Antichrist of Revelation 13 in the end times? There is not enough clear precise data to be certain. What is clear in Daniel, Matthew 24, 2 Thes.2:3-4, and Rev.13 is that this evil leader will blaspheme against God and persecute God’s people cruelly. Whoever or whenever, God wanted the captives in Babylon and all believers in every time period to know that the evil in the world will be brought to an end, and God’s people will triumph in the end. Beyond all these transitory kingdoms is the eternal kingdom of God which we look forward to with delight.

Another teaching from Daniel 7:24-27 is what may be the first time I know of in the Bible that we see that the saints (us) will reign with the Son of Man in the kingdom. We read that the saints will be persecuted by the Antichrist in v.24-25, but he will be wiped out, and then “the sovereignty, the dominion, and the greatness of all the kingdoms will be given to the saints of the Most High God.” This reminds me of Paul’s message to Timothy to persevere in following Christ because, “If we endure, we will also reign with Him.” (2 Tim.2:12) Surely this is all we need to encourage us that if we just serve Him now for a little while, we will then reign and rule with Him in eternity.
CHARLIE TAYLOR