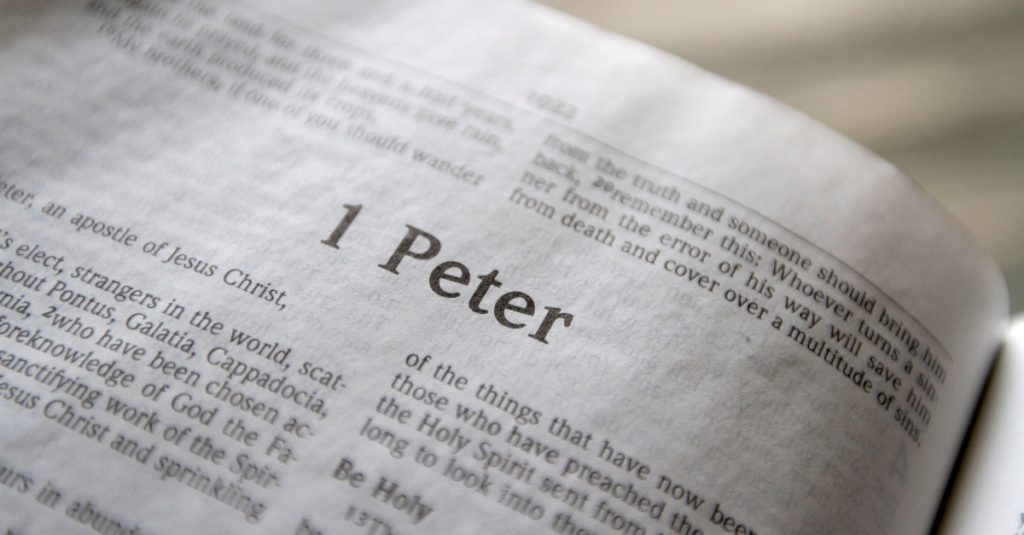 Peter had affirmed that the church is the elect and holy household of God with all the benefits, privileges, and hope that go with it. The issue he addresses now in this section is how they should behave in the larger society, and in the world they temporarily live in. Beginning in 1 Peter 2:11, he gives teaching concerning their responsibilities in a society where they are considered aliens and outsiders.

In v.11, he addresses his audience as “Beloved” which stresses their family love and bond as brothers in Christ. Peter urges them to abstain from the usual selfish desires and insatiable cravings that are common to man. They are beloved to Peter, but aliens and strangers to the unbelieving world. I think this is because of their different belief system rooted in Christ, but also because their life reflects the place we are headed to, and not where we currently live. They should live this way so that their lives are worthy of our Lord, but also to be a good witness to outsiders. In v12, Peter told them to have good behavior so that the non-believers will not be able to successfully slander them, and hopefully will be drawn to Christ through their lifestyle. The world will attempt to speak abuse against Christianity, not by attacking Christ, but by attacking Christians. We hear it constantly in our society today, “I can’t believe in Christianity because of the hypocrites in the church.” Everyone wants to criticize Christians, but nobody can successfully criticize Jesus, so they usually leave Him alone. Even all the other major religions think very highly of Jesus, but not Christians. I find it interesting that there are hypocrites in banking, real estate, sports, politics, and every walk of life, but we all still keep our money in banks, buy property, admire sports stars, and get involved in politics. We do not let hypocrisy keep us out of anything else, but people are looking for an excuse to justify their rejection of Jesus. Nevertheless, Peter’s antidote for this problem is for us to live lives above reproach, because virtuous deeds and good citizenship may silence and refute slander and win over non-believers. Jesus said something very similar to this in Matthew 5:16, “Let your light shine before people, that they may see your deeds and glorify God who is in heaven.”

In 1 Peter 2:13, Peter uses a word that is foul to our human nature—“Submit”. Tell me to climb a mountain, swim an ocean, crawl across a desert, but don’t tell me to submit! This is the cruelest assault on my pride imaginable. We see life as a personal competition in which we try to dominate, and by no means let anyone dominate us. One of my most difficult challenges is to admit that I’m not right about something, or to not get the last word. Jesus submitted to the laws and government that He lived under. In Matt. 22:15-22, the Pharisees were trying to trap Him into breaking the law of Rome concerning a poll tax that the Jews hated. They asked Him if the poll tax was legal, thinking that if He said it was illegal He would offend the Romans, but if He said it was legal He offended the Jews. Jesus showed His wisdom and also His submission to authority by saying, “Whose likeness is on the coin?” They answered “Caesar’s.” Then Jesus said, “Then render to Caesar the things that are Caesar’s, and to God the things that are God’s.” In this simple answer, Jesus confirmed His submission to Roman law, and He got a solid “shot” into a sensitive area of the Pharisees with the implication that they were not rendering unto God what was His. It is the will of God that His people submit to government authority even if they don’t like the type of government or the people governing. Naturally there are exclusions like the story in Acts 4:18-19, and repeated in Acts 5:28-29 where Peter and John were ordered by the government officials to stop preaching the gospel. Peter replied that, “Whether it is right in the sight of God to obey you rather than God, you be the judge; for we cannot stop speaking what we have seen and heard.”

Christians are not urged to be isolationists who withdraw from society. Rather, they are challenged to engage society and present it a better form of moral and religious life. Attractive behavior as a solid citizen serves a missionary purpose. The Greek and Roman culture was very concerned with the maintenance of order. In that first century society that Peter wrote to, everyone had an allotted rank in the social order. It began with the Emperor, then Senators, then nobility, local office holders, urban plebians, rural plebians, free persons, slaves, and aliens. To behave honorably was to conduct yourself in accord with your status. Therefore, Peter was saying to recognize and respect that order in spite of the fact that your real citizenship is in heaven and you are free. Even though you are free, voluntarily place yourself at the disposal of others.

In chapter one, Peter had stressed that they love, serve, and edify their brothers and sisters in Christ, but now in ch.2, Peter is teaching the importance of being a good witness to the unbelieving world around them. Christians have two relationships—with believers in the church, and with unbelievers in the world. We are to edify, build up believers, and evangelize through our lifestyle and relationships, unbelievers.

As an example of being a good witness, and submitting to authority, in v. 18 Peter lists the relationship of a servant to his master. The shocking thing about this is that he suggests they respect and obey not only good masters, but also those who are unreasonable. Why would we be expected to respect and obey unjust and unreasonable people? It finds favor with God that we are motivated to obey God even if it produces unjust suffering. There would be no credit if we deserved to be treated poorly, but if done in obedience to God, it builds up much credit for us.

In 1 Peter 2:21-25, we have the foundation for Christian ethics. The picture of the suffering servant who is innocent, but suffers at the hands of unrighteous men is drawn from Isaiah 53. Peter even quotes from Isa.53:9 to build up his case that we should behave like our perfect example, Jesus. Christ is God’s innocent suffering servant who is presented as a perfect substitute for us. He died in our place because we deserved death for sin, yet the sinless Christ replaced us. How was He able to bear up under such injustice? Verse 23 says that He “kept entrusting Himself to God who judges righteously”. Jesus did it out of obedience to God’s will, and out of love for man. We are to “follow in His footsteps”. The image here is that of deep snow, which makes walking difficult, but Christ has already walked before you making a path so you can walk there.

We need to have confidence in the justice of God that eventually justice will be served and that all things will be made right. We will be rewarded for serving God through righteous suffering for His sake. Don’t forget that (v.24) by Christ’s unjust suffering on the cross for us, our sins were washed away, and this enables us to live righteously. Peter again borrows from Isaiah 53:6 that before Christ we were continually straying like sheep. We were wandering around living lives independently from God, and therefore lost in sin, but now through Christ we have returned to God and are reconciled. Now we are safe within His protective care as a good Shepherd cares for His sheep.

I like a parallel passage from Paul in Romans 12:18-21, “If possible, so far as it depends on you, be at peace with all men…Do not be overcome by evil, but overcome evil with good.”   What a great rule to live by!