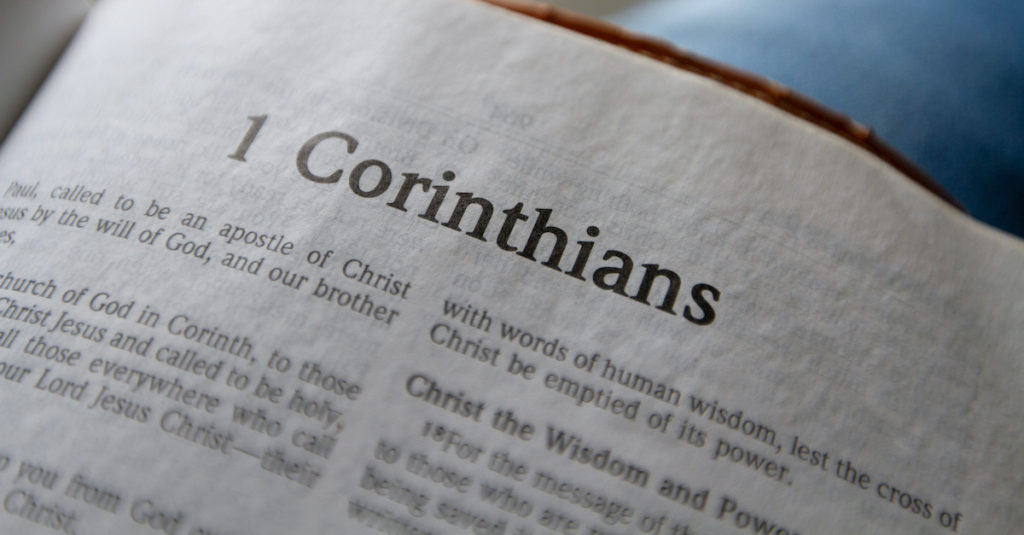 The Apostle Paul had written a scathing letter to the church at Corinth admonishing them for immoral behavior (1 Corinthians). Now at the end of his third missionary journey, he had the difficult task of writing to them again regarding a different issue. Fortunately, the church had responded to his first letter in repentance. Paul commended them in 2 Cor.7:8-11 that his letter had produced a “godly sorrow” in them, and they had been made sorrowful to the point of repentance. Paul had sent Titus to check on their progress, and Paul promised to follow him with a visit to Corinth of his own. Critics of Paul in Corinth had accused him of not being faithful and trustworthy because he had not shown up like he promised. This was just another opportunity for these false teachers to attack Paul, criticize his ministry, and deny his special office of being an Apostle of Jesus Christ. Therefore, Paul wrote the second letter to the Church at Corinth in defense of his ministry, his apostleship, and the true gospel that he preached. On his way to Corinth, Titus met Paul in Macedonia with good news from Corinth. Most of the Corinthians had repented and affirmed their loyalty to Paul, but the false teachers were still there criticizing Paul. Paul preceded his visit with this letter explaining why he had not shown up before because of intense persecution, and to ask them to prepare an offering for the depressed church in Jerusalem. Chapter 8-9 is the key New Testament passage on giving.

The God of all Comfort

Paul had been prevented from coming to them by severe persecution “to the point of death”. In 2 Cor.1:3-5, Paul praised God for comforting him in the midst of his affliction. No matter how great the threat was, the comfort of God more than matched it. Paul also had the perspective that there was a very positive purpose in his affliction. Because Paul had been afflicted and experienced God’s comfort, he was able to “comfort those who are in any affliction with the comfort with which we are comforted by God.” Paul’s suffering just made him more qualified to comfort others. Paul even had the “sentence of death” in order that he could better learn to live by faith and entrust his ministry to the Lord in spite of his circumstances. In ch.1-2, Paul explained his travel plans, his delay, and his love for them.

In ch.3, he explained the superiority of the New Covenant of grace over the Old Covenant of laws, and in ch.4 he taught on the supernatural character of his ministry. Even though his life was hard, he did not lose heart because of the awesome things God was doing spiritually through the gospel he was preaching. Imagine the comfort it brought Paul to see hundreds of lost souls believe in Christ and be transformed by the Spirit of God. Everywhere he went people were being saved, and given hope and meaning to their lives.

In 2 Corinthians 4, Paul used a beautiful and humble image to represent the power of God in the message that he preached. In 4:7, Paul said it was like having the most valuable treasure in an earthen vessel (meaning his body), “we have this treasure in earthen vessels, that the surpassing greatness of the power may be of God and not from ourselves.” What a great image of the weakness and temporary nature of his body compared to the power and eternality of the “treasure”. What exactly did he mean by “the treasure”? In 4:1-6, Paul listed a series of descriptions or explanations of this dynamic treasure: v.1, this ministry, v.2, the word of God and the manifestation of truth, v.3, our gospel, v.4, the light of the gospel, v.5, Christ Jesus our Lord, v.6, the light of the knowledge of the glory of God.

Paul had no gold or silver or diamonds or pearls. He had no treasure as the world knows it and chases after it, but Paul had a treasure that motivated him far beyond any of these. What could possess him that he could overcome prisons, beatings without number, floggings, stonings, rejection, and suffering of every kind? It was a treasure that far surpassed gold. Paul had the Word of God, the truth, the good news that produces salvation. God had enlightened his heart to the knowledge of the glory of God. It was a transforming message for all that received it.

In Matt.13:44-46, Jesus told a parable about a real estate guy illustrating the same truth about the value of this treasure. “The kingdom of heaven is like a treasure hidden in the field, which a man found and hid; and from joy over it he goes and sells all his other properties and buys that field.” Then the parable of the pearl came next, “the kingdom of heaven is like a merchant seeking fine pearls, and upon finding one pearl of great value, he went and sold all that he had, and bought it.” These parables describe Paul’s life and ministry. He had been entrusted with a treasure whose value far surpassed all else, and he was obedient to this stewardship of sharing the treasure with all who would receive it.

Why Put Such a Priceless Treasure in a Clay Pot?

Paul’s mortal body is compared here to a plain cheap clay pot which had very little value. A pot like this only had the value of what was stored in it. The treasure is the gospel message that God uses to save souls and change lives. By using cheap plain clay pots like Paul or us, God makes it clear that the power and the value is not in the messenger but in the message. Paul’s enemies in Corinth were professional orators, and they characterized Paul as being “unimpressive in appearance, and his speech contemptible.” (2 Cor.11:10). In 2 Cor.11:6, Paul admitted that he was unskilled in speech, and reminded them that unlike these smooth talkers, Paul had not charged them anything (11:7). Instead he likened these false teachers to “deceitful workers, disguising themselves as apostles, and no wonder, for even Satan disguises himself as an angel of light.” (11:13-14).

How Can We be a Plain Clay Pot with this Treasure?

To be of use, a vessel must be AVAILABLE, CLEAN, and EMPTY. God will not force us to serve Him, but if we make ourselves available He will use us. Just as you would not use a filthy pot to put valuables in, God will only fill a clean vessel. Therefore repent and clean up your lives in anticipation of this more valuable treasure. No pleasure, no desire, no vice, is worth missing out on this treasure of surpassing value. Another problem most of us have is having too full lives. Our pot is so full of ourselves that there is no room for God. We must first empty ourselves of our selfish goals, desires, and agenda before we can be filled with God’s treasure and be used by Him to spread that treasure.

Paul’s critics were saying that Paul was not an important guy, not rich, not powerful, and not talented. Therefore Paul wrote a series of contrasting statements describing the circumstances of his ministry in 2 Cor.4:8-18, “we are afflicted, but not crushed; perplexed, but not given up hope; persecuted, but not forsaken by God; struck down, but not destroyed”. Then Paul went on to tell the church that it was all for a great purpose—“for Jesus’sake”, and for the church’s sake. Paul had a spiritual perspective that enabled him to see and live for what is unseen—the spiritual and eternal realities that motivated him to serve the Lord in spite of afflictions. In verse 16-18 he then continued with contrasts of the material and the spiritual man, “Therefore we do not lose heart, but though our outer man is decaying, yet our inner man is being renewed day by day…while we look not at the things which are seen, but at the things which are not seen; for the things which are seen are temporal, but the things which are not seen are eternal.”

When you consider the afflictions and hardship of Paul you have to wonder what motivated him to persevere. In 2 Cor.5, Paul lists at least two very important reasons for serving the Lord. In verse 1-13, Paul wrote of his expectation and hope for the resurrection and rewards at the judgment seat of Christ. He said he groans for, longs for that heavenly resurrected body, “in this dwelling (current body) we groan, longing to be clothed with our dwelling from heaven”. He preferred to be “absent from the body and to be at home with the Lord.” Therefore his motivation or ambition was to “be pleasing to God” now in this body because, “we must all appear before the judgment seat of Christ”.

The second great motivation he discussed in ch.5 is found in v.14-21, “For the love of Christ controls us”. Because Jesus died for us, we should die to ourselves and then live for Him. If Christ died for you literally so that your sins are forgiven, then now you should live to serve Him. In fact God has committed a ministry to us, “the word of reconciliation”, meaning that our stewardship is to represent Christ well, and introduce people to Him through the gospel message. Everyone wants to know their meaning and purpose for being, and Paul gives it to us, “we are ambassadors for Christ, as though God were entreating through us”. The atoning work of Christ on the cross makes it possible for all people to be reconciled to God, and God has chosen to bless us by appointing us his ambassadors to represent Him in broadcasting the good news. Everyone wants to think that they are a good person, but only within our relationship with Christ can we experience and even become “the righteousness of God in Christ.”(2 Cor.5:21).
Charlie Taylor